IV. In Which Our Hero Actually Finishes Something

I have been knitting up a storm! 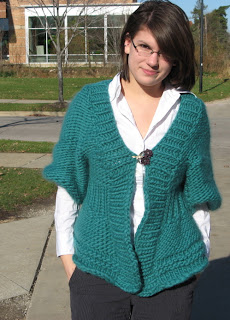 Pattern: Belle Cardigan in Interweave Knits Fall 2007
Designer: Wenlan Chia
Yarn: Twinkle Soft Chunky
Colorway: Sea Green
Yardage: Five 83-yard, 100-gram skeins
Needles: Size 17 & 19 24-in. circulars
Notes & Modifications: I opted to leave off both the pockets and the buttons. This yarn is very bulky, and I only look small under very particular circumstances, which is to say, not under four layers of Twinkle Soft Chunky.
I took out the buttonholes after two different placements still left something to be desired. I like the drape and line of the fabric much more since I took the buttons off, although it's not as fitted as the designer intended. I close it using a vintage pin I found at a tent sale at the student union, but I might try to find a clasp. Overall, I'm very happy with the modifications I made and yeah, still very much in love with the color, even two months later. 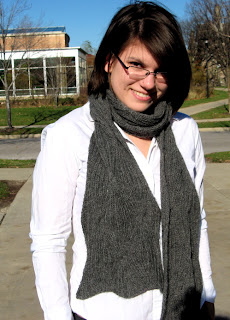 Pattern: Interlocking Balloons, from Scarf Style
Designer: Shirley Paden
Yarn: Joseph Galler Superfine Prime Alpaca Yarn 3-ply
Yardage: One 665-yard skein
Needles: Size 6
Notes & Modifications: I knitted this scarf for my lab partner. I'm hoping that it's not too scratchy for him, because it seems like there's some long, coarse hairs still left in this yarn, even though knitting with it is positively buttery and thus I wouldn't care if it was a little scratchy, but I'm a freak of nature. I wet-blocked this and pulled it into shape. I love this pattern and I might have to make one for myself. Although it will probably be pink, knowing me.

This week has been interesting. Next week, I have two exams, two weeks later, my final exams, and then I get to go home and see my mom and my rats. Tonight, I saw the campus jazz ensemble, which was amazing. I was sitting in the audience with a huge grin on my face. The brass was huge, the pianist was incredible, and the conductor was cracking jokes all over the place. I want to get involved in the music on campus, because the conservatory here is world-class, and, well, why not?

In the meantime, I have integrals and interlocking balloons. 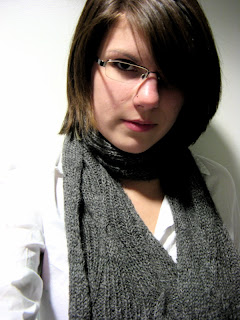