Hey guys - back from Indonesia! Pictures and stories to come. Hope everyone had a good month!
Posted by Cory Ellen at 6:25 PM 2 comments

Goin' to Bali... Be Right Back 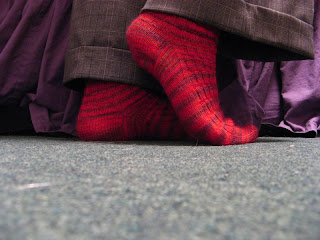 Magenta'd!
So I finished these over Christmas and worn them several times since then... oh man, these socks are awesome. The pattern is Nancy Bush's Gentleman's Fancy Sock pattern from Vintage Socks, which has become one of my favorite sock pattern books. I also invested in Knitting on the Road and the new Knitting Socks with Handpainted Yarns book over the break. Both look pretty exciting, but I'm bringing just Knitting on the Road to Bali with me, since the name is appropriate. I also got some soft pink Malabrigo to make myself a Hat Fit for a Boyfriend, and a ton of delicious sock yarn. Man... I have a problem. 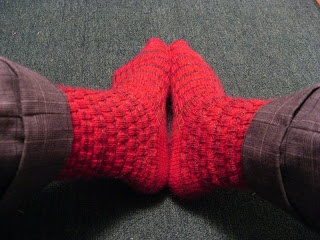 These socks took less than one ball of Schaefer Anne, and I would definitely knit them again, maybe in a different yarn. Perhaps I'll knit some for the Curmudgeon, since this pattern is much stretchier than the last one I attempted!

Anyhow... I will be in Indonesia for the next 3-odd weeks, and I'm leaving my computer at home. Hope everyone has a great January!
Posted by Cory Ellen at 3:02 PM 2 comments

A Hat for Matthew and a Pile of Yarny Goo 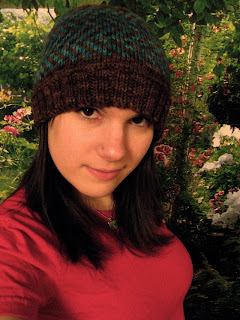 Here, at long last, is Matthew's hat, that he commissioned towards the end of the semester to keep his ears warm during the long Ohio winter. It ended up taking 2 balls of Waterlily in brown, and one ball of turquoise Queensland Rustic Wool, and well over a month of getting really excited and knitting half the damn thing and then sitting there thinking really mean, rude things at the yarn because something just wasn't right. 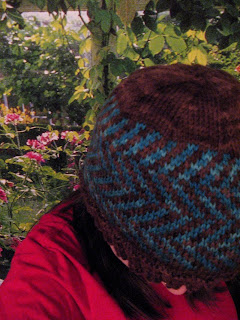 This hat, in short, has kicked my knitting mojo's ass. I spent about 3 hours today re-knitting the ribbing and grafting it on because the original 132-stitch ribbing was just too big. I couldn't even bear to take pictures. It was just really floppy and weird, and totally didn't fulfill the whole "clingy ribby stuff at the bottom of a hat to make it stay on a person's head, DUH" role. Which led to me re-knitting a cuff, grafting it to the hat, and then trying to unravel the original ribbing while both ribbings were attached.

Which led to a veritable yarnpocalypse. For some reason, ribbing doesn't like to be ripped backwards - something about the transition between knit and purl created these strange, spider-webby (and completely f*$%*7ing infuriating) tangles of yarn. Frustrated beyond all belief, I took a long, ragged breath... and started cutting the little ribby twerp right off the hat. It took the better part of an hour, but then I had a nice, clingy rib.

I'm a little frustrated with myself on this project because Matthew originally wanted a garment that was two colors (gotcha), hat-shaped (check!), reasonably fashionable (...ish?) and long enough to pull over his ears when it was cold, or fold up if it was too warm. I'm afraid that I wasn't able to fulfill the last requirement. But I think it's cute. And very manly, of course. 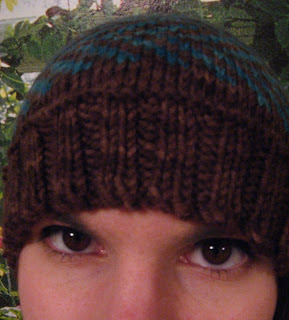 I'm down to two projects on the needles again, one of which is the cabled gauntlets that has infected me with a terminal case of Lazy. The other is this little pile of awesome: 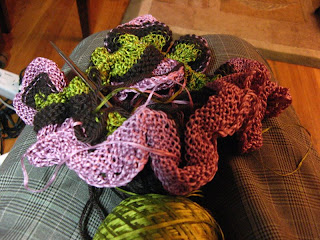 What the heck is that, you might ask? It is the result of me going to to Tricoter in Seattle with my mother, too much money and a dangerous lust for expensive yarn. The yarn is Alchemy (my first time working with it!), the pattern is the Magician's Scarf, a design specifically for Alchemy yarns. They had a couple of them worked up in the store, and they were awesome: it's shibori, so the yarns are Silken Straw, a 100% silk yarn that literally feels like straw, and Sanctuary, a silk/merino blend. After I'm done, I pop it in the washer (gulp....) and it comes out all fabulous and stuff.

I love the colors... it feels very vintage to me. I can't wait to see the finished results!
Posted by Cory Ellen at 3:10 AM 2 comments