What Is Wrong With Me?

Apparently, I have way too much time on my hands.

So, backstory: I went to Cultured Purls about a month ago with my mom, and we wandered around checking out the new inventory for about an hour. They had a gorgeous pink lacy cabled vest. I tried it on. It fit perfectly. I debated for a little while over filling my room with even more yarn, but I figured it would be a quick knit. And I decided on a pretty spring green. Although I am a huge fan of pink, I already have a little pink sweater. My mom treated me to the yarn, and it sat in my room for a while. About a week ago, I picked it up. And could. Not. Stop.

So yeah. I have another finished object. 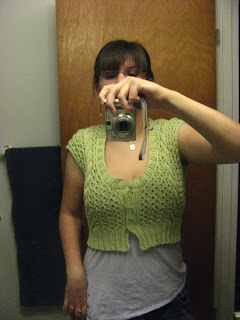 The instructions have the same problem that I've found in some other yarn-company patterns: a little light on the specific instructions. When I first started knitting, this would have completely perplexed me, especially since the pattern is slated as "easy". But it made me realize how much my technical skills have improved in the last year. 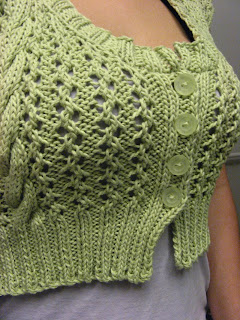 I found some perfectly matched buttons at Jo-Ann (oh noooo! Corporate monster of dooooom!) and did all the finishing today. I also packed the rest of my room for college and went to a piano lesson that kicked my ass. I'm pretty ready for school to start. Even though I won't be as productive on the knitting front, I like the structure of classes. It makes me even more happy to have the knitting time that I get!

At the beginning of my time in Seattle, I started the Arctic Diamonds Stole in Malabrigo laceweight. I bought three skeins, as per yardage requirements... but it turned out that I only needed the better part of two. Two of the skeins matched really well, but the third was too light - which I realized almost a complete repeat into the second skein. I didn't like the sudden transition, so I ripped back four diamonds (sob) and restarted with the third skein, which was still different, but had much more in common colorwise with the first skein. After that, it was just a matter of plugging away until I finished the damn thing. Which took several weeks longer than I hoped it would. 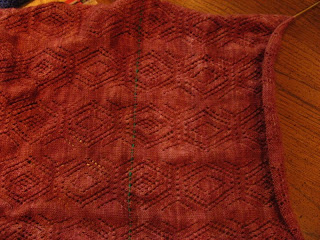 The stole, before surgery. 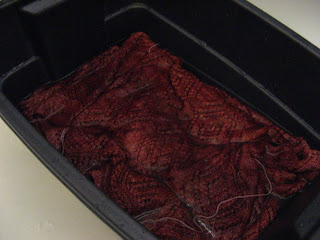 Three weeks later, soaking for an ill-fated wet-block that worked abysmally because the t-pins kept on popping out of my mattress and making me use terribly offensive language.

But oh - little iron, how I love you! How you turn my tiny, wavy-edged, sort of pathetic stole into a light, airy rectangle of goodness. 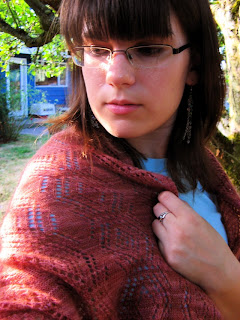 Even after all these trials and errors, I have to admit that I'm pretty fond of this one. 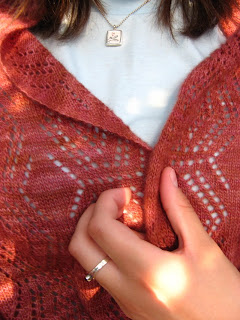 Pattern: Arctic Diamonds Stole, Interweave Knits Winter 2006
Yarn: Malabrigo Laceweight, colorway Cognac
Yardage: 2 skeins, 940 yards
Needles: Size 3 Addi Lace Turbos
Modifications: Knitted 7 repeats of diamond pattern instead of 5. I'm glad that I did, because 5 would be far too short for my taste. I'll probably end up wearing this mostly as a scarf, because stoles aren't super practical in Ohio in the middle of winter.

And my second FO, finished for over a month.

Pattern: Hexacomb Cardigan, Interweave Knits Spring 2008
Yarn: Queensland Cotsoy, color Blue
Yardage: 7 skeins, 770 yards
Needles: Size 6
Modifications: None.
Notes: This fits all right, but I would have liked to see bust shaping, since mine flares out at the waist even though it fits in the bust. 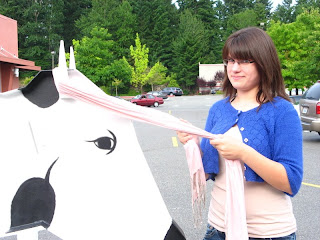 The cow and I, we hang out. 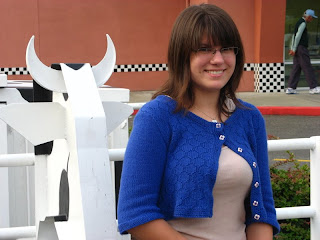 See how relaxed we are around each other? It's magical. And she moos whenever anyone crosses the street, not just when I come by in my cute little cardigan. How considerate! 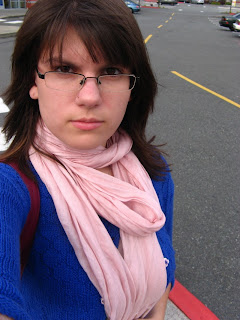