Yesterday Emily, our coworker Zach, and I drove out to Letchworth State Park and went on to Nunda for the yearly carnival. On the way, we stopped and saw Mark Twain's gravesite, which was pretty awesome. And, while Emily was driving, I finished my Anniversary socks! 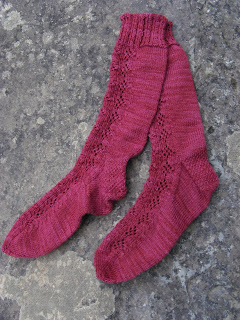 At last! I started them last year during my EMT class. They were too short for my toes. I got fed up and dropped them, and started knitting the second one in October. Then, I found out that I had massive gauge issues, and that the second sock fit much better than the first. Since I'm ridiculously finicky about my knitting, I decided to rip out the first one and reknit it so that the gauge matched. 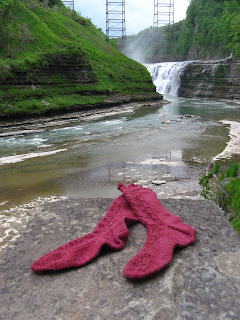 And it does! Here are my socks chillin' at Letchworth next to the falls. 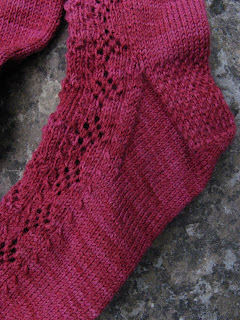 Since the toe was too short and I was using a ripped sock for yarn, I had to dip into the leftovers from the second sock in order to finish the third one. Luckily, it was just in the toe - I can't even see the color change. Success!

I'm slowly but surely whittling down the number of projects that I have on my needles. I'm working on Hexacomb again, and it's going pretty fast since I divided for the fronts and back. I still need to block a couple of my projects, but I figure I'll do that when I have a little more space and I'm not living in the basement.
Posted by Cory Ellen at 3:18 PM