One of my goals for the summer was to finish as many wips as possible, and I am happy to say that I have been dutifully (read: obsessively) plugging away at that very goal. After New York, Emily's family was kind enough to send a few boxes home for me. In my excitement to get back to the west coast, I forgot to keep any major projects with me. Which, of course, caused an irrational desire to buttonband, sew, block, and button the shit out of anything I could get my hands on... complicated only by the small fact that my boxes and works in progress were in a UPS facility somewhere in North Dakota. After receiving my boxes a few weeks ago, I warily eyed the crumpled pile of Cotsoy Hexacomby goodness that was shoved in a big canvas Knitty bag in the bottom of a box that was mostly occupied by rice cooker, boots, and an EMT book.

My poor little cardigan, so diligently completed except for finishing before leaving New York, was cast aside for the finishing of scandalous underwear, a scarf, another sweater, and (gasp) a newer, younger lace project. No wonder little Hexacomb sobbed and wrinkled in her box for weeks. 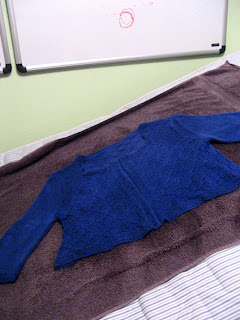 So, as a form of apology, I brought her out into the sun today. We took a field trip to Cultured Purls out in Issaquah, where I have been spending many hours petting yarn and working on my lace project lately. All of the people I've met there have been super nice, and Hexacomb was only too happy to be caressed with a new, slick pair of Addi Turbos and fawned over by interested customers. In return for my renewed interest in her soft hand, simple but beautiful stitch pattern, and drooly amounts of drape, she was very cooperative. I finished her button bands, sewed up her sleeves, and wove in her ends this afternoon; tonight I gave her a bath, tried to shape her with pins (which she did not like) and finally gave up and just put her on damp, shrugged her off, and shaped her with my fingers. 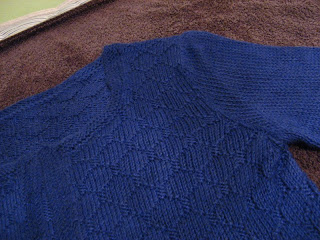 As you can probably tell, the yarn didn't like absorbing water. The discoloration was the result of an impatient soaking, because I wanted her shoulders to lay flat. I can't wait to get buttons, because Hexi... oh, she is damn cute.

Hopefully I can coerce my mother or one of my friends to take some real FO pictures. Stay tuned to see Hexacomb in all of her blue cotton/soy sassiness!
Posted by Cory Ellen at 3:25 AM