A lot has been happening here in Ohio since I last wrote. First off, the fact that it's Ohio and not Seattle. Surprise!

But moving on. We're about halfway through the semester, with fall break sweeping in on Friday afternoon and taking most of us to New York, Chicago, New Orleans, or some other exciting place. I'm staying here, knitting, watching movies, tinkering with some Silky Wool for a jacket, and doing organic chemistry... and I'm actually looking forward to it quite a bit. I will definitely appreciate some quality Oberlin squirrel-bonding time, if nothing else. For some reason, the roly-poly red squirrels that start going nut-crazy this time of year are charming to me. Sometimes I'll be walking along Tappan Square and happen to see a squirrel perched halfway up the trunk of a tree, glaring and chattering at me as if I greatly offend its squirrelly sensibilities.

There has been a lot happening on the knitting front, but very little photographing of said knitting. I finished the Fair Isle cardigan about a month ago, and have finished two pairs of socks in the last three weeks. I also cast off a simple basketweave scarf for the man friend in some squishy Malabrigo. He is still from California, I reasoned, and has but one scarf. Even if it is one that I made him. Cough. 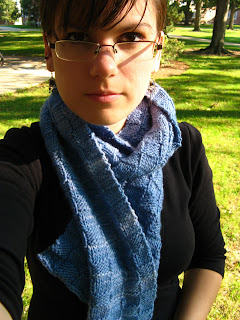 Malabrigo Delicious Scarf
I knitted up both skeins of Colinette Jitterbug in my stash, which made two gorgeous pairs of socks. I love the colors, and I found out that the skimpy yardage is actually just enough for a pair of my plain 3x1 ribbed socks. Perfect for raising some swing partners' eyebrows. 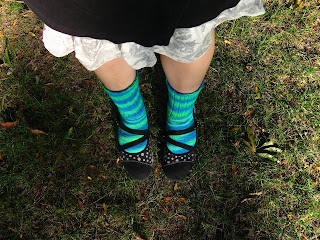 Doin' the Charleston, in Jitterbug (how fitting!)
Some friends and I are planning an FO party soon, where we will photograph our finished objects, chat about yarn, and maybe watch some X-Files. In the meantime, I'm working on a cowl pattern from some handspun wool/tencel yarn from a local studio, a kicky red vest a la Father Dougal McGuire from Father Ted, and a match to the cabled gauntlet I finished back in July. It doesn't want to knit itself, dammit.
Posted by Cory Ellen at 12:25 AM