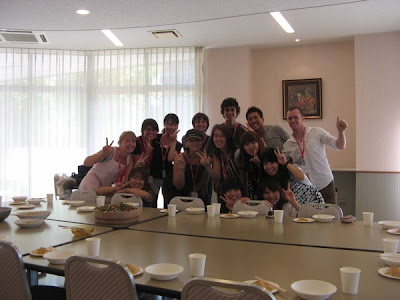 Today a bunch of study abroad and Japanese students got together and made some tasty food: chirashizushi and warabimochi. Chirashizushi is sort of like deconstructed sushi - the base layer is sushi rice, and for the toppings we used maguro (tuna), snap peas, ikura (salmon roe), egg and nori, although from what I can tell, there's a wide variety of toppings that could be used instead. Warabimochi is a dessert made of bracken starch (although ours was more likely a tapioca-bracken-starch-sweet-potato-starch combo) and dusted with sugared toasted soybean powder, akin to mochi in texture but not in taste. We made both in a tiny kitchen in what I think was a teacher's dormitory. It was great fun - there were too many people to be working in one small space, so we all took turns. While some of us worked on stirring warabimochiko into water, heating it to translucency, and plopping spoonfuls into ice water to cool, those of us taking a break chatted about music, boyfriends, and our small town college lives. Less confusing was the chirashizushi preparation - wash some rice, throw it in the rice cooker, make some eggs, cut some tuna, mix things together. Done. Lots of jokes were made, and many of us had were still recovering from a late Friday night, so the general atmosphere was one of tired multicultural silliness. 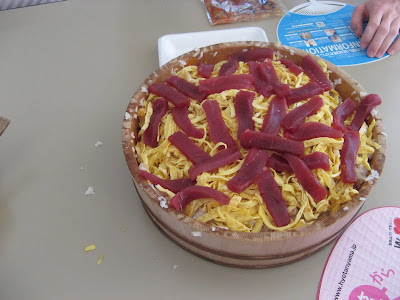 I have to admit I didn't try my hand at making the omelette, because I have a track record of messing up super-thin egg-type concoctions. My housemates and I made tamago nigiri a couple of times this summer, and every time I made the eggs, they ended up either incredibly ugly (but delicious) or burnt and ugly. I keep away from anything that involves flipping hot objects, save grilled cheese. After everything was prepared, we put it all together on the table. Someone commented at this point that it looked sort of like pizza. 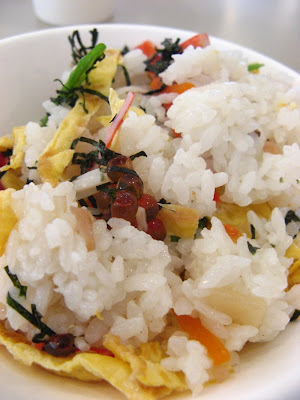 I'd say that it's like a weird but amazing combination of fried rice and sushi. The warabimochi was also delicious - a little gelatinous, but especially when coated in the soybean powder, a lovely combination of soft, sweet and savory in one bite. I'm a somewhat reluctant eater when I'm in the States - I don't like berries, I find the concept of eating raw meat sort of strange and unappealing, and in general I'm not the biggest fan of yogurt, a lot of fruit, or meat that doesn't begin with b and end with acon. (Blatantly not true. I like your basic chicken, turkey, tuna, whatever. But I do have a fondness for bacon that my arteries would like to sue me for.) For some reason, though, since I got to Japan, I've eaten and enjoyed maguro (where have you been all my life, delicious raw tuna??), salmon, salmon roe, sticky roe/kombu/sea urchin salad, what I think was chicken intestine, Japanese pear, giant Concord grapes, peaches, sake-soaked pickles, kabocha (pumpkin)... the list goes on. I've eaten and not enjoyed so much raw liver, strongly fishy sashimi, natto, and a few other things. I've been pleasantly surprised by most everything, which is nice, since I'm ordinarily pretty timid about trying foods whose origins I don't necessarily know. I think the key for me is quality, since all of the food I've been eating here is from nice restaurants and choosy groceries - apparently I'm just a picky jerk. Perhaps I'll have to test that theory when I return. 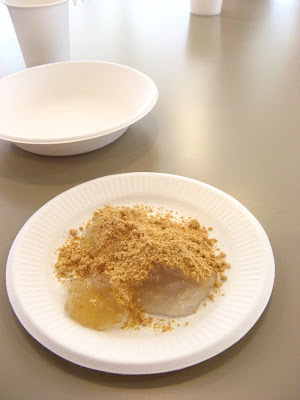 I also went to karaoke last night with four friends, and we ate omuraisu and sang 90's songs, Disney songs, and Lady Gaga until we were hoarse. Then I took the train from Hirakata-shi to Gotenyama, which is a 5-minute walk from my host family's house - and it only took about 20 minutes between when I left the karaoke place and when I got home, and it was absolutely beautiful out while I was walking home in the dark. In any case, hopefully all of these shenanigans will leave me satisfied enough to buckle down and get some studying done tomorrow. Hahah. We'll see about that.
Posted by Cory Ellen at 1:49 AM