It's New York in the middle of May... I think I'll finish a scarf!

At last, after two months and a lot of knitting in class and in the car, my Santa Cruz Malabrigo scarf is finished. This scarf is absolutely perfect for the yarn, and the color is amazing. This is as close as I've gotten to capturing the actual color. Also, it's in the bathroom of the publishing house where I'm working this summer... which is full of nice clean lines and black and white tile. I suspect that more finished objects are going to weasel their way into getting photographed in this bathroom, because the light is perfect for knitted objects. 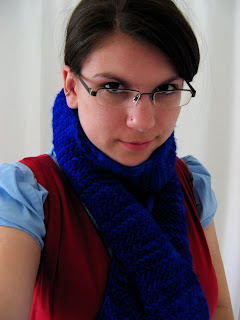 For some reason, lately I've had a real fondness for bold color combinations... the roomie and I went swing dancing the other night, and I wore a black wrap dress with a sky-blue scarf - "Very European," the roomie commented - and today it's a red dress with a blue button-down shirt. My taste in clothes, it is crazy! Good thing I don't really leave the publishing house... 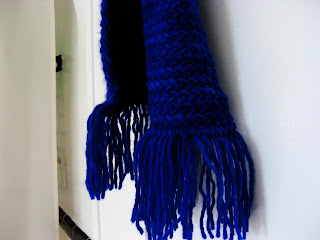 Here is the fringe of doom... it was actually relatively easy, only requiring scissors, a crochet hook, and lots of patience. I had to cast off three times in order to make the end match the cast-on - it's always a little frustrating to try to match the cable cast on, especially with different stitch patterns. This one made these huge gaps when I cast off knitwise, so I searched Ravelry and found a better one: k1, *sl1, k1, psso, psso*, repeat until 1 stitch left, k1, psso. The double psso didn't make sense at first, but it was nicely in line with the stitch pattern, and although it left small gaps, they were filled in by the fringe and the weaving in of the end.

The hexacomb cardigan is coming along too... I will post pictures when it's a little less skeletal.
Posted by Cory Ellen at 4:20 PM