Are you ready for Fall semester? 'Cause apparently, I am. 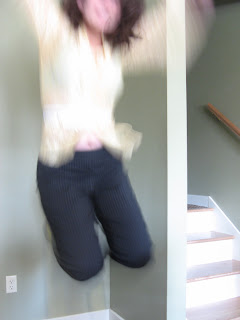 The knitting has been quiet. Smith's commissioned me to make a scarf out of the lovely Debbie Bliss Chunky Donegal Tweed, so I whipped this up in about four days. It's still a little warm to think about a double-wrapped seed-stitch scarf of wool and angora, but I'm pretty happy with the way it turned out. 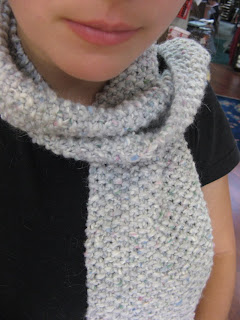 You can see a peek of the cute little fringe here, along with the loveliness that is Smith's in the background. Seriously, this is one of my favorite yarn stores ever. 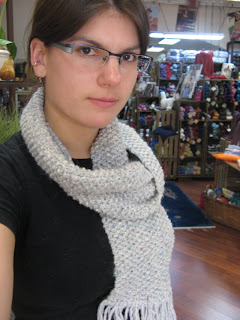 Also on the needles: the same damn things that have been on the needles for the past two months. Argh. I'm really itching to cast on something in my Handmaiden, but with three projects still in progress, I know I would get overwhelmed.

Luckily, as if you hadn't seen enough of them: clothes! 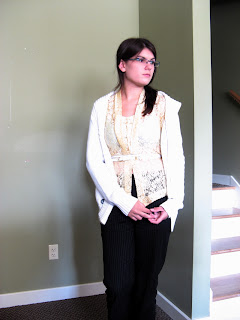 Top is a pale yellow lace Indonesian temple garment that I picked up in Ubud. I don't know how authentic it is, but it's beautifully made. And, with a strategically placed belt and a pair of high-waisted DKNY slacks, I was not called scandalous even once. (The front buttons over the chest and is open past the waist and the print is somewhat sheer, but I have yet to find a layer that works well under it, so I'm Carrie Bradshawing it up. Usually one would wear a sarong with this, and if I were really trying I would bust out one of mine and throw some fresh flowers in my hair, but hey) 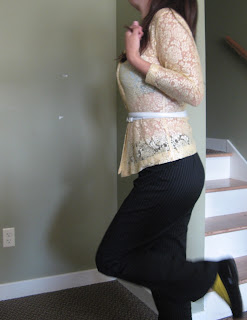 Last but not least, see the handknit yellow sock?