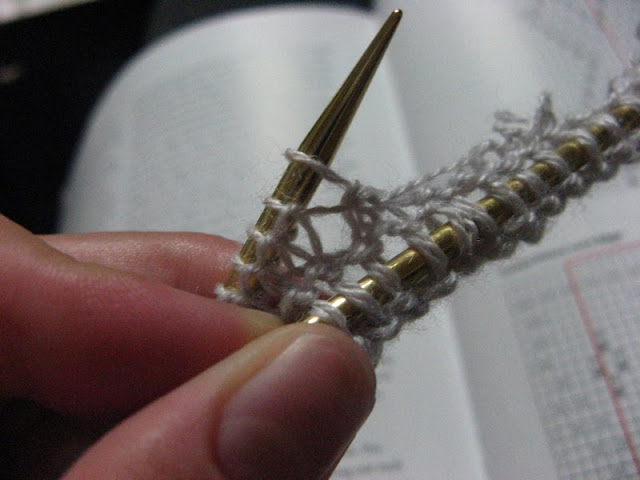 Status of knitting: upon knitting the first row of pattern after casting on 409 stitches for the second edging of Crown Prince, I found out that, in fact, I had 410. Cue exasperated sighs, the picking up of 410 cast-on stitches from below, and the tragic ripping of almost 3 full rows of knitting. That's...1230 stitches? How depressing. 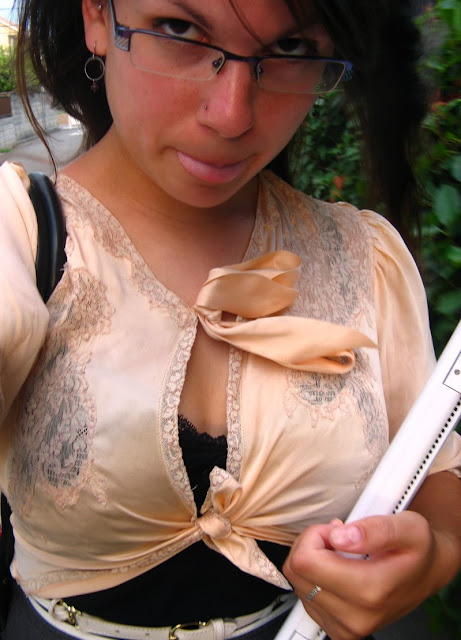 The weather is starting to cool down to non-miserable temperatures at night, but my walk to school is still pretty gross. I can't wait for October to roll around so I can wear my woolies and boots! In the meantime, in my quest to keep my clothing choices conservative but still pretty, I've taken to wearing the cute little $.99 pink lacy capelet over camisoles and low-cut cresses, knotted at both the bottom and the bow. When it's loose, it tends to be sort of tent-like, but I like the way it looks tied even though it's a little weird. Also, from wearing my hair in a bun all day yesterday, it was a big corkscrew curl last night. The humidity isn't hair-friendly here so I've mostly been wearing it up - just another reason that I can't wait for the cooler weather. 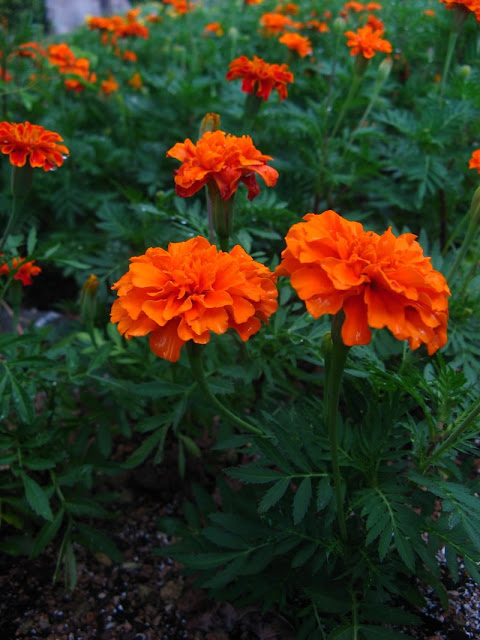 Marigolds on the way home. Whenever I pass by this particular corner, there's butterflies and moths fluttering around the flowers. In many ways, this trip to Japan has felt different than the first time, perhaps because I'm older, I know more about the culture and history, and I'm more aware of my failings in the language department. I feel like this time I'm noticing different things - where before I was in awe of the details of the landscape, this time I see people in a different way. In moving from a culture that is so familiar to one that feels open in some ways and yet closed in others, I often find myself an outsider looking in and listening rather than participating. In general, I don't mind taking on this role - although I think I've lost a lot of it with age, I used to be relatively introverted and reflective as both a child and a teenager, and it's an old but familiar mode of operation for me. It's been sort of fun to rediscover my quieter personality.
In other ways, it's really difficult to be around people whose depth you can't perceive because of language, and vice versa. My host family thinks it's awesome that I like spicy food and like to knit, and I think my host family is funny and incredibly kind, but I feel like I'm missing out on their stories. Sometimes I can catch what they're saying, but when it's early in the morning or late at night and my language skills go out the window, I know that I'm only getting pieces of a whole. 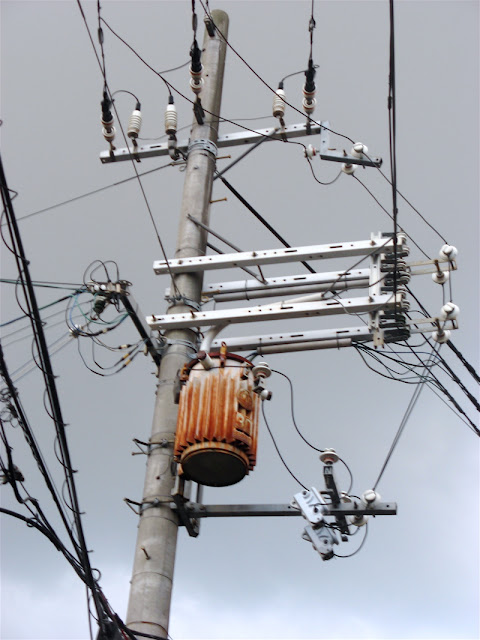 I've also been thinking a lot about where I stand in relationships lately, both the friendship and romantic/post-romantic kind. I've been listening to Bon Iver, Radiohead, and Coldplay a lot, along with some old music I haven't listened to in a long time. It's surprising how much I associate certain music with certain people and places and times. Bon Iver I listened to non-stop over spring break with my friend Emily, when we went swing dancing and drank wine with our friend Zach while watching Lost on her parent's floor; when we visited Yale and while she was in class I drove to downtown New Haven and an attractive male graduate student on a street corner smiled at me and commented on the rain falling on our glasses and how that was funny. Coldplay I remember listening to in the library while I did chemistry homework, and walking across campus late at night to meet my friends Natalie and Dan at fourth meal. Being separated by four thousand miles from the people that I care about has made me appreciate them even more, and even though I love being here, it's nice to know that I will have people to come back to.
Posted by Cory Ellen at 10:50 PM

I love how music brings you back to very specific times and places. Right before I left Oberlin I made a "soundtrack of my life" playlist that I've pretty much been listening to all the time here. It's nice to be reminded of who I was when I was 16, or 18, or 21, especially now when everything about my life is completely different.

Speaking of music I identify with people...specifically you....Meg Hutchinson is coming to MA (about an hour away from New Haven) in the middle of December and I really want to go!

Yes. I especially love the music that we listened to on our trip from Oberlin to Vestal to New Haven. I liked hearing what music you associated with high school and seeing where our tastes intersected and diverged.

Aww Meg Hutchinson! You should totally go, and let me know how awesome it is! She's a fantastic performer.