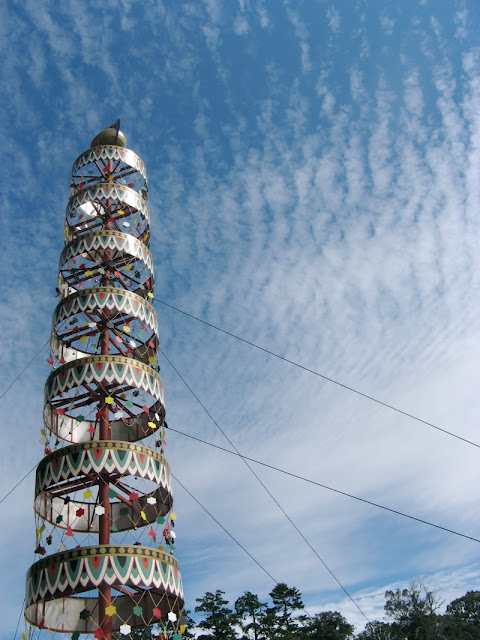 Ooh, look, shiny!  Pay no attention to the fact that I couldn't possibly have taken this picture this weekend!  Tower outside the Daibutsuden at Todaiji, Nara, in celebration of the 1300th anniversary of its founding.
I'll be trying out some new things on the blog soon - switched up the editor to the new version, and having a tech-savvy friend help me out with layout and such.  Figured it would be a fun thing to do while cooped up in bed on a weekend.  Stay tuned!

Today I was supposed to have lunch with my Oberlin advisor this morning, then go to a practice session at a local jazz house and out for okonomiyaki and sake with my jazz piano teacher afterward.  However, after a feverish day spent mostly asleep yesterday and still feeling like a small troupe of guinea pigs was running laps in my skull this morning, I decided to go to the practice session and call it a day.  I've finally mastered the fine art of wearing a mask whilst also wearing glasses today: I think the trick is to tighten the flexible part of the mask around the bridge of your nose as much as possible, then slide the glasses pretty far down your nose - it lets the warm air bypass the glasses where they would usually get caught between your eyes and the lens.  Oh, the things you must think about because you're an idiot and forgot to bring a single pair of contacts to Japan.

It's funny, some of the things that are unique to Japan and yet make a lot of sense for living in the States as well.  Here are my top three so far*:

- Wear a mask while sick.  At the very least, it keeps you from coughing/snorgling your ooze onto everything quite as much, even if it doesn't stop your germy exhalations from coming into the world completely.  Also, there's an added bonus of keeping the air you breathe in warmer and more humid than the air outside, which seems to help clear the cold sooner.

-  Wash your clothes in a washing machine, and use a nifty little hanging rack with clips to air-dry your clothes.  It requires a little more forethought - for example, if you needed a pair of pants to wear the same day, it's probably not the best option - but saves on electricity and heat damage/shrinkage to your more delicate clothes!

-  Shower before jumping into the tub.  That way your bath is nice and clean, and if you're like me, you won't have to try to dunk 20something inches of soapy hair underwater while simultaneously attempting to not drown.

And last but not least, a small gripe:  I have a pair of Rodier slacks given to me quite generously earlier this year.  The hand and their tendency to wrinkle if you look at them sideways tell me it's linen, the tag tells me it's 100% wool.  Fine.  I washed them last week, and as I expected, every wrinkle washed out, felting was non-existing, and the hand still felt exactly like freaking linen.  Maybe it was a mistake in tagging or translation, but it still makes me a little frustrated.  And, ok, a little smug.


*disclaimer - it's entirely possible that some European countries do these things as well, but I have never been there so I'm going to have to claim ignorance!
Posted by Cory Ellen at 3:44 AM