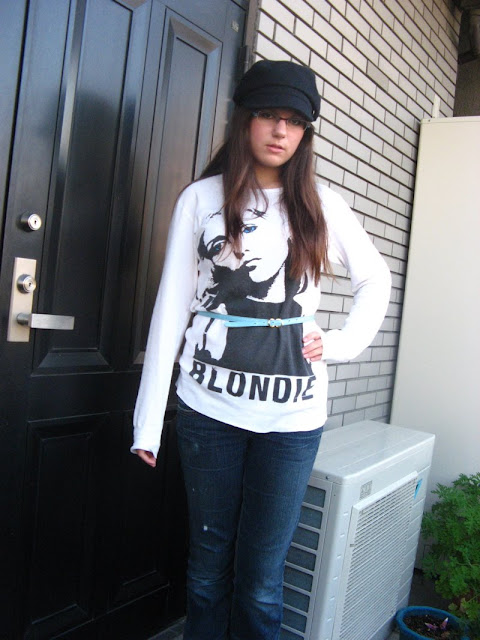 This week at Kansai Gaidai, the Japanese students are having a culture festival, complete with supercheap tako yaki, yakisoba, hot dog stands and a mini flea-market. It was at said flea market where I found this Marc Jacobs printed thermal, for an awesome ¥500. It's really cozy and a little (read: way) more punk rock than I usually wear. I guess this is my week for going a little outside of my style comfort zone, and so far I've had a ton of fun with it. Today I loaded on the black eyeliner and realized as I was reaching for pants to wear with it was that it really begged for skinny jeans - the first time in my life I have ever thought such a thing, and correspondingly I don't own a pair! I think I did all right, though. My host mother asked while I was eating breakfast if I had a party or something to go to, to which I laughed awkwardly and said, nope, just going to school.

And, in fact, tonight is a night for staying in. A Kansai Gaidai Death Plague is going around, and I seem to have caught it. I felt bouncy enough this morning, but by the time I got home this afternoon my brain felt pickled. My host mother gave me some unknown orange tablets - which prompted a hilarious moment where I had just downed all three, suddenly realized that she may have meant for me to pocket two to take later, and asked her, panicked, I am supposed to take three, right??!? Yes, indeed I was. Crisis averted.

Now it's time for me to drink my weight in fluids and head to bed for what I'm sure will be the most pleasant night of sleep ever. At least this means I can stay in and knit while watching Mad Men all day tomorrow and not even feel bad about it!
Posted by Cory Ellen at 7:03 AM