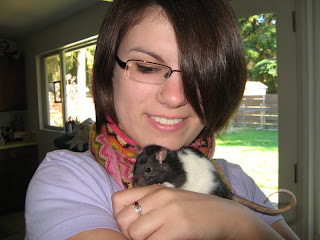 I got an email from my mom a couple of days ago telling me that one of our rats had died. She had a mass in her stomach after a fall, and the vet wasn't sure if it was cancer or a ruptured spleen, but either way she was getting into her golden years and the surgery would have affected her quality of life too much to be worth it. My mom told me this afternoon that it turns out that it was a ruptured spleen, caused by Moly's love of jumping from the couch back to her cage. (Seriously, it was like watching an athlete. The muscles would twitch. The brow would furrow. Then she'd take off like a rocket.) Apparently she hit the table wrong, and was gone within a couple of days. 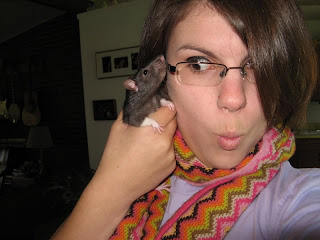 In her better days, Moly was a rascal. She was also a certified Glasses Inspector, and along with her sister Vanadium, formed the Sleepin' In My Foodbowl brigade. I think it's somehow fitting that she died doing the acrobatics she loved. She was relatively young, so it's sad, but at least she got to take one last glorious flying leap before she went. 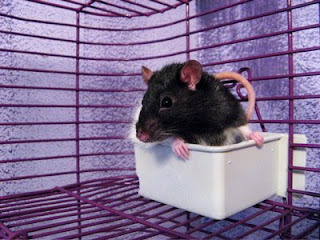 Those are adorable pictures. RIP, cutie.

She went doing what is sounds like she loved! We've all been there with a pet!