lace and other forms of awesome 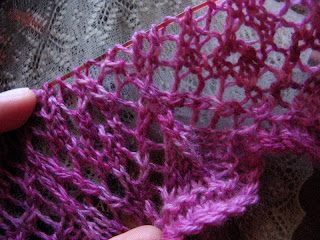 I did not, in fact, cast on with Sundara yesterday. I did, however, start going nuts on Miralda. I had cast on very loosely the other day, and wasn't sure how it would look once I got going. Sort of disappointed in myself, I kept on trucking: knit the two rows, and started the lace chart.

Now, bearing in mind YarnHarlot's post earlier this year on the Saga of Miralda... I have been a little concerned. I did not have to cast on more than once. I have not made any dreadful errors yet. But I'm sorta waiting for the other shoe to drop, because since the initial apprehension over the loose cast-on edge (which actually worked out just fine!), this project has been perfect. Like... knitting cashmere on Addi Turbo Lace Needles while alternating snorting kittens and drinking the world's most awesome cappuccino awesome.

I knit on it this morning while driving from Oberlin to the Intermuseum Conservation Association Lab so that about a dozen students, including me, got to frolic (well, as one can frolic around a bunch of priceless paintings and [!!!!!!] Civil-War era pure silk American flag [!!!!!]) around a professional art conservator's laboratory. Seriously, when she started stripping off gunk from an oil painting with triammonium citrate, I just about died with happiness.

After which, we all got back into the van and I knit all the way home. And, in about two hours, I'm going to go see Ed Helms (that's Andy from the office, and a correspondent from the Daily Show) at a Convocation lecture.

Talk about a great day.
Posted by Cory Ellen at 5:54 PM

I see the lace bugs are active in Oberlin this year.