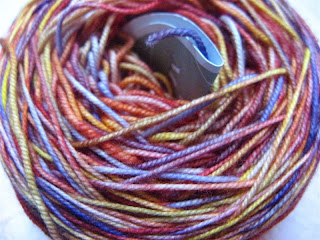 Okay, so I have a confession:

I'm addicted to this stuff.

Well. Maybe not addicted, because it's become general knowledge that Cory's yarn problem is not so much an "addiction" or "difficulty abstaining" than a "wonderful yarn sense that leads to pretty finished objects and sometimes random gifts to people she adores". Which sounds much nicer, doesn't it? 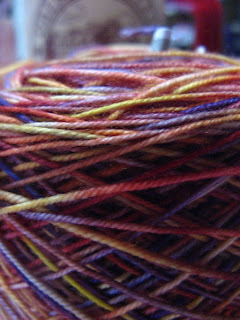 But onto the yarn. This is Ella Rae Lace Merino. My third skein. Gulp. I made a very pretty pair of Hederas with a pink skein, and I have a blue skein lying in wait until it can be used for a design project whenever I have enough brain cells to devote to the process. Which might be a while.

The wonderful thing about this yarn: the color, which is delightfully tie-dye-esque until one casts on... at which point each stitch becomes a different, slightly more magical color as you knit. Also, have I mentioned that it's incredibly soft? Because, um, it's incredibly soft.

I'll have to apologize for my absence the last few days. I came down with a cold over the weekend that threatened to eat any chance at a good grade on my Physics homework, so I spent most of the last two nights snuffling, wheezing, and poring over my damn textbooks. Because although at the time, I really could give a flying rat fanny about the velocity of the airplane as it drops a projectile into the ocean, I do want to understand physics. I do I do I do!
Posted by Cory Ellen at 9:08 PM

That was actually really helpful you mentioned yhe other colors and projects of the yarn, because I had no idea they were all the same brand and type.