NSFW Disclaimer: You're about to see an adult woman wearing only a bra and jeans. If you're at work, or if you or someone in the room with you is sensitive to nudity, please feel free to stop reading here. 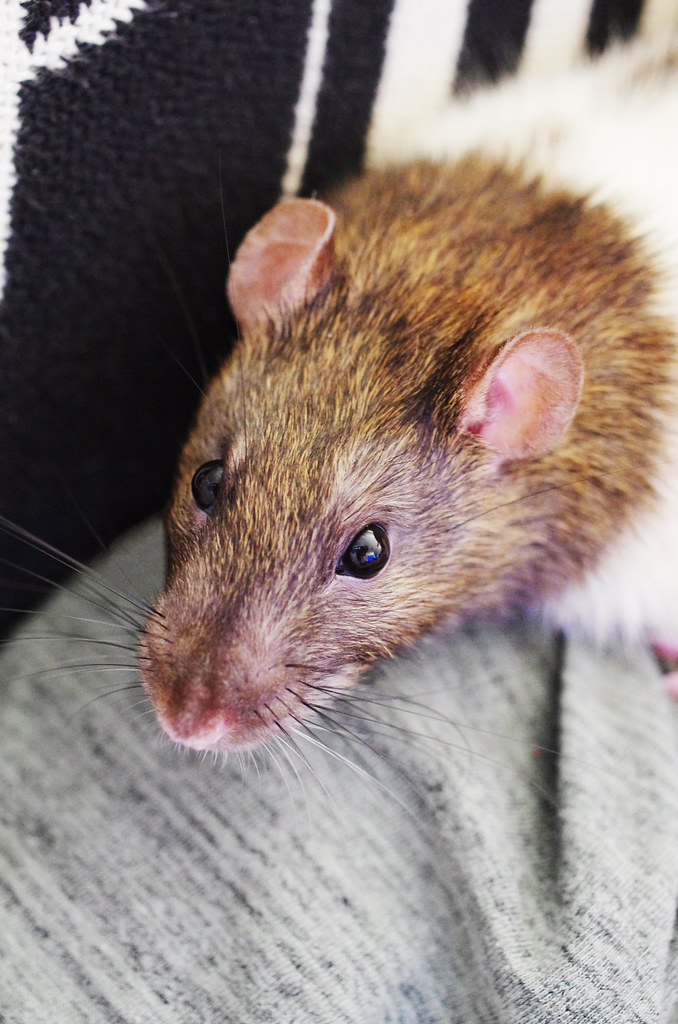 I briefly thought about cropping my face out of these photos, in the end I decided that I'm okay with looking awesome in a bra on the internet. Fashion has already cornered the market on depicting women's bodies as faceless objects of envy, sex, and scrutiny, and that practice severs the connection between the physical body and the experience, intellect, and emotional complexity of a living, breathing person. As others more eloquent than I have argued, when you view a whole person as a collection of body parts, it makes violence against them that much easier.

So, in short: if my boobs are going to be on the internet, I'd rather that my noggin was directly associated with them. 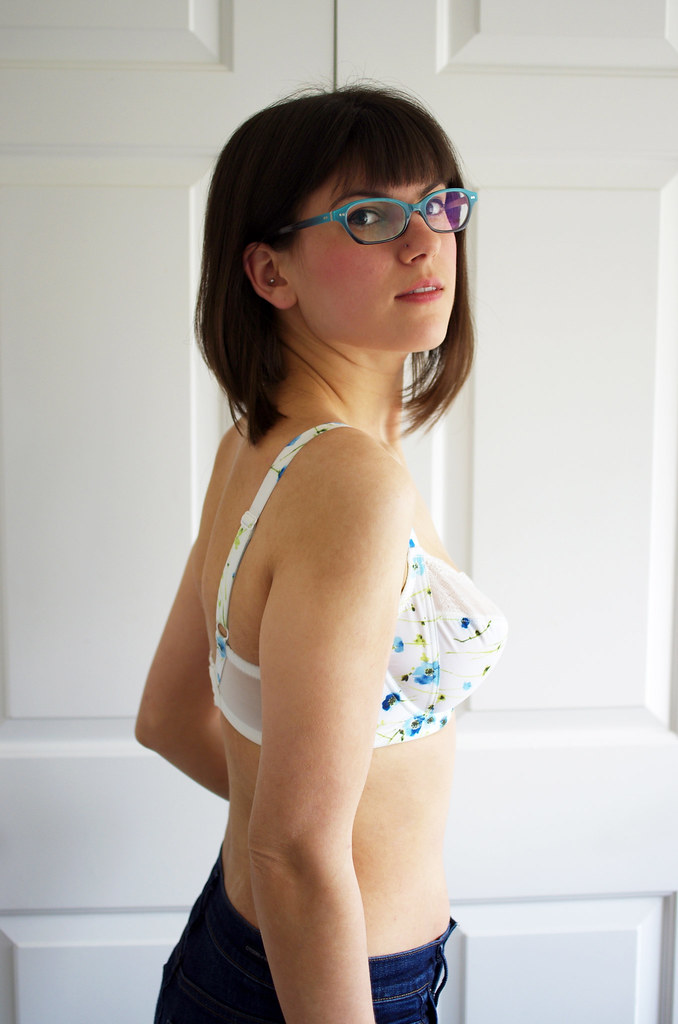 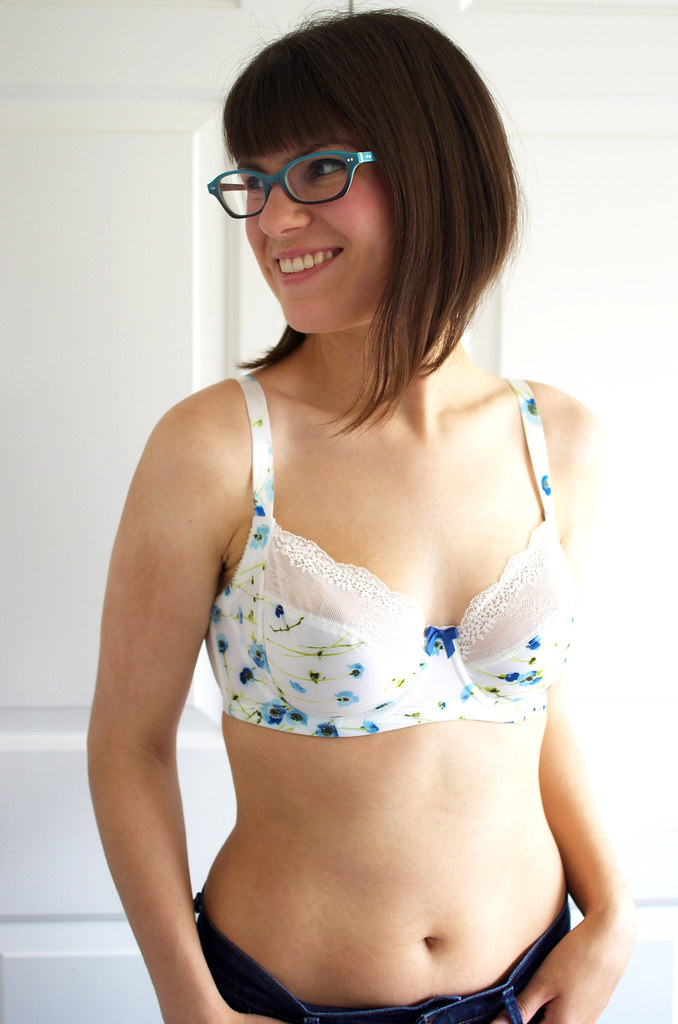 Parfait Louisa, 30DD - I love this bra. It has the perfect vintage-but-not-too-pointy shape for me.

But moving on! I want to talk a little bit about fitting, bras, and self-image.

As with so many other women, my relationship with bras and breasts is long and fraught with disappointment and frustration. I started developing when I was about ten, started getting catcalled by men in cars by the time I was thirteen, and by sixteen had a full-blown complex about my chest.

I got a lot of attention for them as a teenager - both wanted and unwanted - and with my limited options from Victoria's Secret, it just seemed like I was resigned to a life of quadboob, parents at school looking at me disapprovingly, and totally inappropriately-aged men telling me I was sexy. (Yikes.) I had friends who treated me like a bobblehead with boobs attached to it - which I eventually fixed by getting better friends - but being treated as weirdly sexual based solely on my appearance, by both strangers and people I cared about, was something I really struggled with. Not only that, my bras were always falling down, or spilling over, or unhooking on their own, which made me feel like one big walking billboard that said: LOOK AT MY BOOBS, GUYS!!!!!

And instead of thinking that my bras were wrong, I absorbed the idea that there was something seriously wrong with my body, and I accepted that I would never feel good in a bra.

Pausing for a second and looking back, all I can say is this: 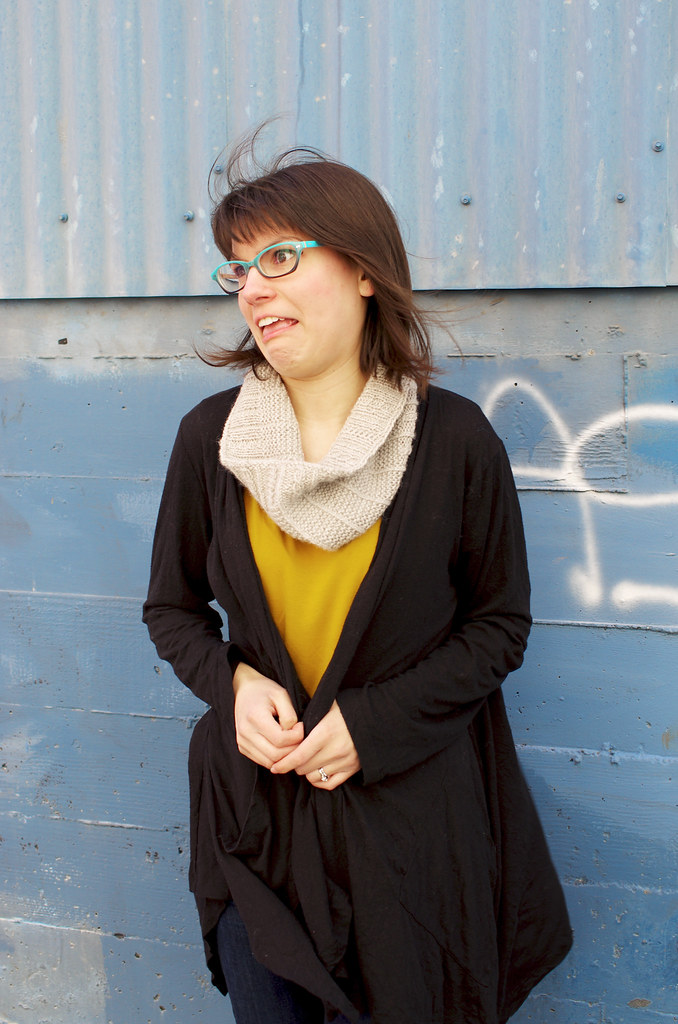 Seriously. What the fuck.

Because now, I absolutely love bras. I love wearing them; I love that I can change the shape and style of my clothing by changing my bra; I love hanging out and sewing in just a bra and jeans because it's just so comfortable. I don't dread bouncing up the stairs, or running to catch a bus, or leaning over.

And it feels awesome to say, after all these years, that I really like my body. Like, holy shit, how long did that take? And all thanks to wearing bras that actually fit.

So how did I get there? Well, as a teenager and young adult, I wore everything from a 34B to a 38DD, and the bra size thing seemed like a total crapshoot to me, even through college. After over ten years of wearing the wrong size and dealing with constant pain and wardrobe malfunctions, I was at the end of my rope, but totally lost about what to do next. Then Lumberjack did a little research and found the magical universe that is the bra subreddit, r/abrathatfits, and gently suggested that I take a look. Blammo! My head exploded.

Here's a brief overview of what I learned.

Band Sizing is Way Simpler Than I Thought 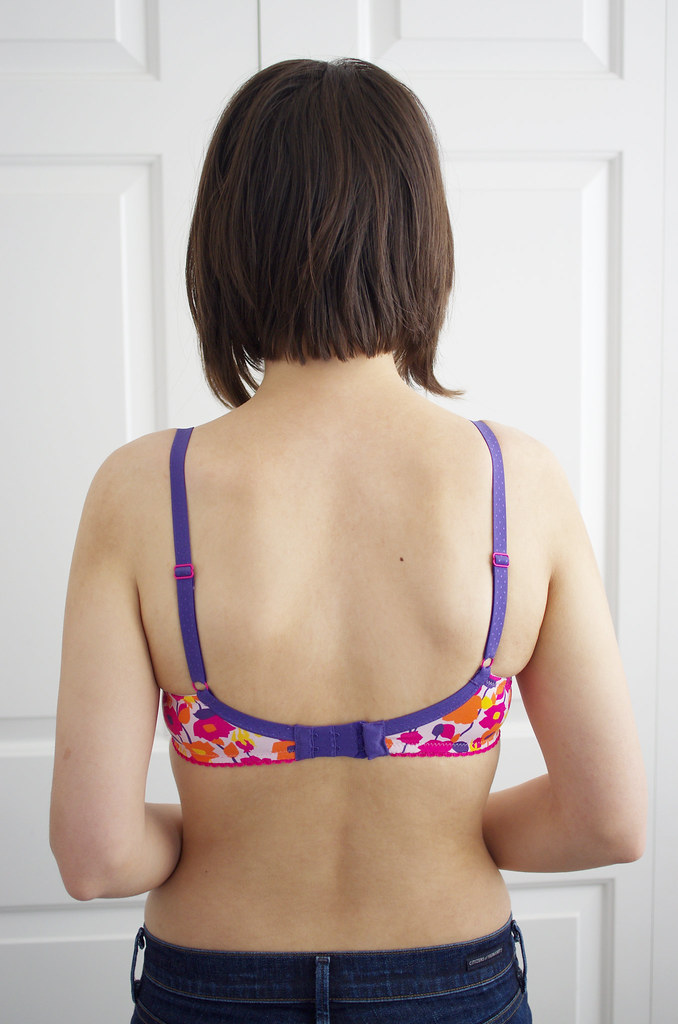 I found out that adding 4" to your underbust measurement is outdated and inaccurate for many women. Many women - including myself, for all those years - wear bras far too large in the band and far too small in the cup; the too-small cup with the large band makes the bra feel too tight, but it's actually not. Instead, a good starting point for your band size is your exact underbust measurement, rounded to the nearest even number. From there, you try things on, sizing up or down until you find a comfortable fit.

For me, the band feels like a firm hug around my ribcage and lies straight across my back. Most of the support comes from the band, and I can slip the straps off my shoulders completely and still feel supported. It took me a little while to get used to a tighter band, but I don't have indentations or raw spots on my shoulders anymore, and my boobs don't ache at the end of the day. For me, the tradeoff was well worth it.

For folks with disabilities, mobility issues, or chronic pain, a zero-ease band might not be the right choice, but again, it's all about trying things on!

Dear Victoria's Secret, DD is Not The Biggest Cup Size, Thanks 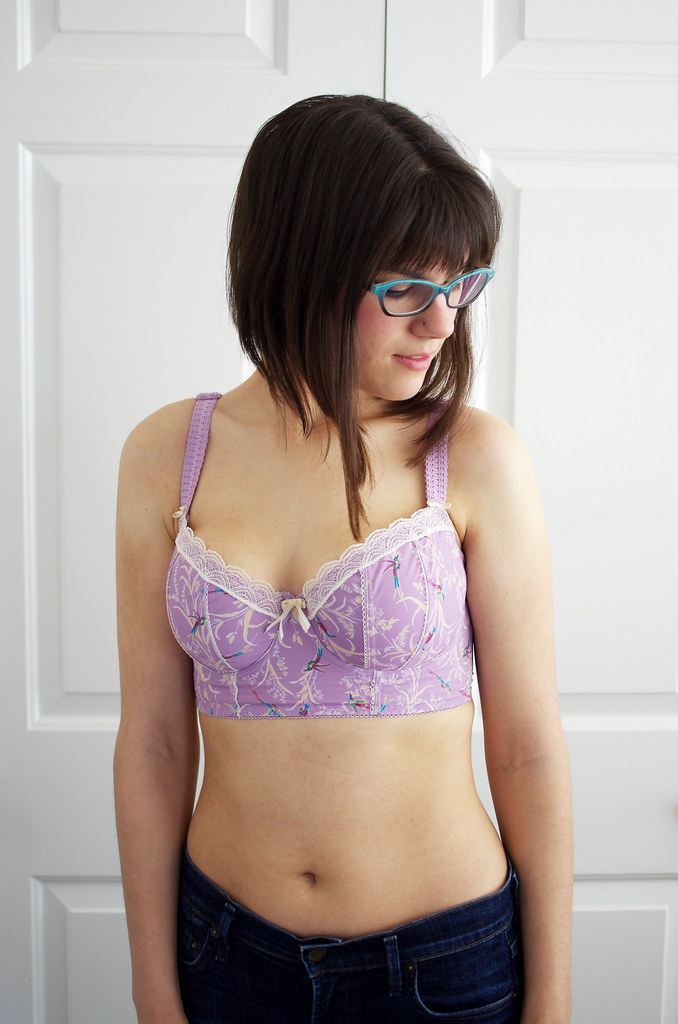 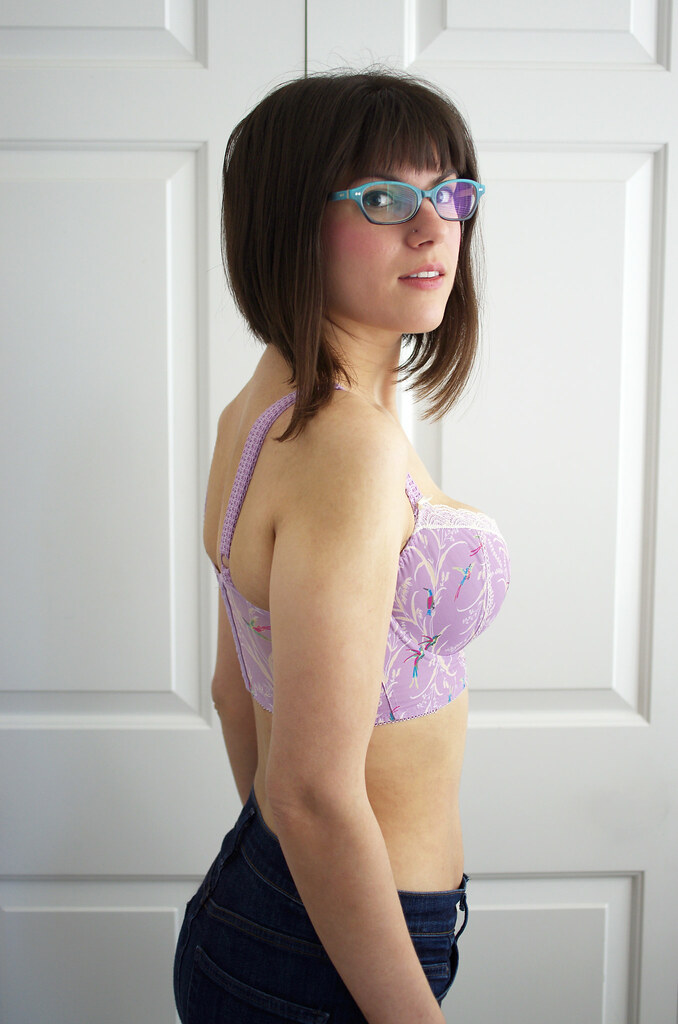 Freya Just Flew In Longline, 30F - please note that this bra is about a cup size too big for me now, so I'm wearing chicken cutlets to fill out the cups up top. I'm of the firm opinion that padding isn't "cheating", especially if it helps you get the shape and look you want. In my case, padding helps me continuing wearing a bra that no longer fits perfectly after my weight loss. Rules? Nah. I THROW IT ON THE GROOOOOUND.

This can be different between brands and in larger band sizes, and different countries have different sizing schemes as well. I've found that the UK sizing scheme works best for me, and doesn't include absolutely stupid cup size names like "DDDD". I tend to prefer UK brands like Freya, Fantasie, Curvy Kate, and Parfait to most US brands, but brand preference is, like so many things, a very personal decision!

It's also interesting to note that rather than fixed sizes, cup sizes are proportional; "D cups" mean nothing without a band size attached to them. They simply describe the volume of the cup relative to the size of the band: for example, although a 38D and a 28D are both considered "D cups", a 38D is actually a larger cup than the 28.

Shape, Fit, and the Myth of Armpit Fat 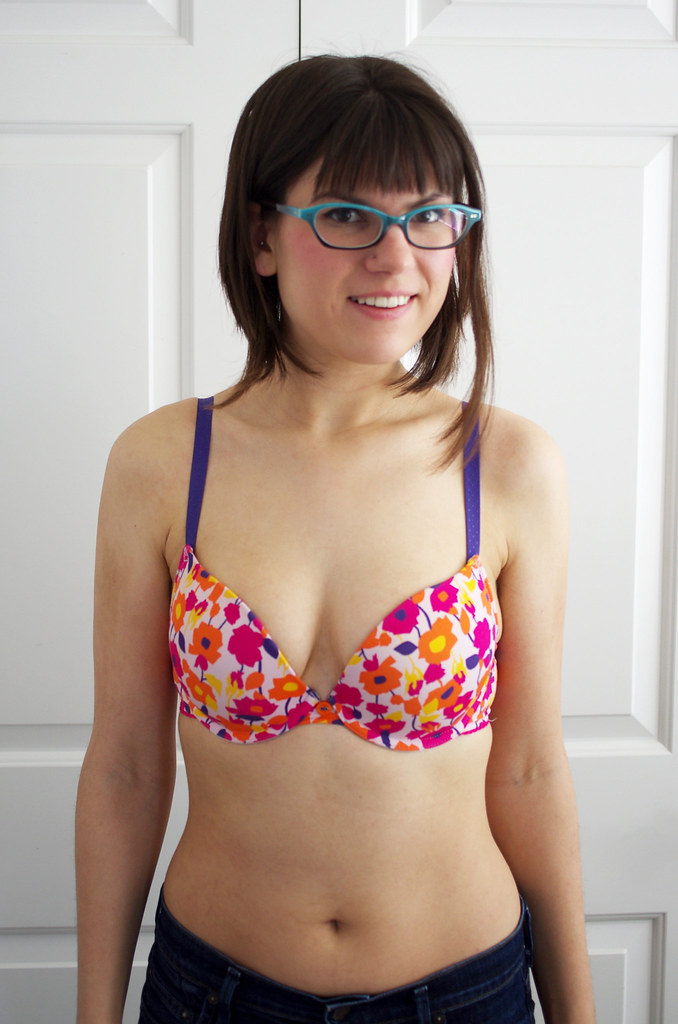 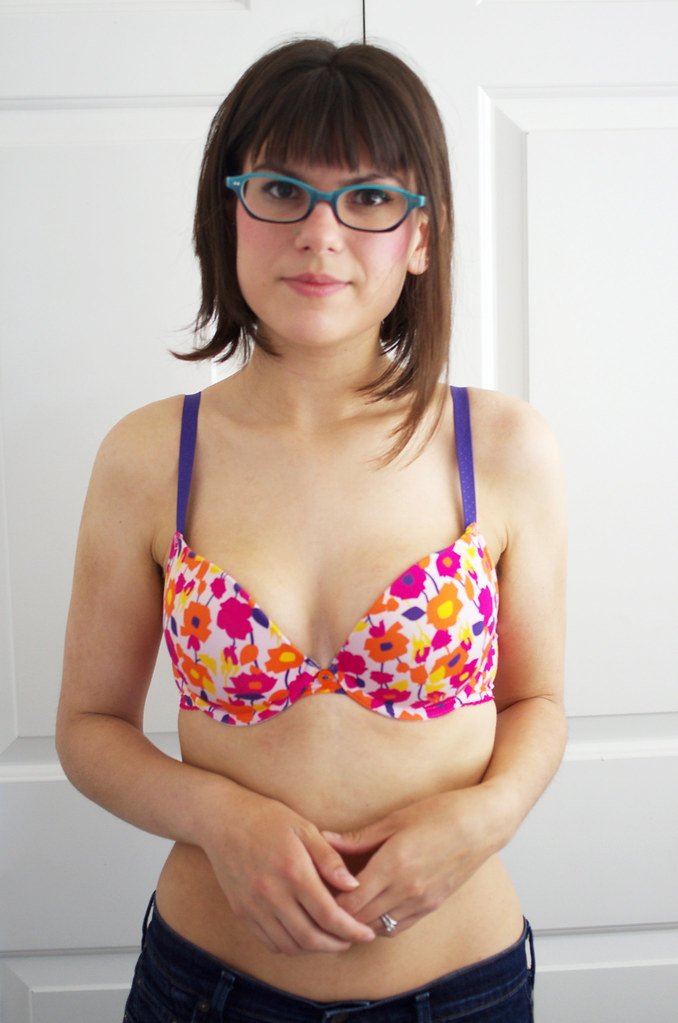 Cleo Neve Plunge, 30DD - Once you have the right size bra, scooping and swooping is important! Take a look at the improper fit on the left: the wires are lying too low on my chest, and as a result my tissue is pressed flat and doesn't fill out the cups. After scooping and swooping on the right - major difference! See how it looks like I don't have cleavage anymore? It's actually because my boobs are being supported correctly!

Different people have different shaped breasts, and different styles of bras fit and flatter those shapes. If a bra isn't flattering, even in the size that's supposed to fit, the style is probably not right for you. Your boobs are great, and your bra should fit them, not the other way around! Luckily, there is a wide variety of options: from molded bras, to seamed bras; from plunges to full-coverage bras.

It can be daunting to have to try on so many bras while you're learning your new size, especially when they aren't quite right, but rest assured that there's a style that will fit and flatter your individual shape.

I'd also like to note that a lot of what many people see as "armpit fat" is often actually migrated breast tissue pushed to the side by too-small cups - it took me several months of scooping and swooping everything into my new bras to feel like I had settled into my true shape. No migrated tissue in these parts anymore!

Of course, with all of this information, the key is personal preference, style, and comfort. Some women might not find this information works for them and that's okay! But I know that it changed my life, and I hope that being open about my own experience might nudge a few unhappy bra-wearers into the magical rabbit hole of bra fitting to find their own lingerie bliss.

In other news, I'm starting my ballgown today! I hope that I'll be posting, but it might be a bit sporadic around here for bit. Thank you to everyone for your support and love in these last few months. I'm so, so excited to share my gown with you.

you are sweet to advise folks to upcoming nudity, but honestly, have you turned on the television lately?

Nothing I haven't seen thrifting with you. At least you have the decency to go into a changing room. last week I witnessed a woman strip down and try on a dress at Salvation army displaying a thong and a barely there bra.......felt sorry for the mom with the two boys in the same aisle.....

Wow, thank you so much for this post! I've been reading you for a while but I am always procrastinating commenting, shame on me!
This actually comes right on time since I am trying to shop for the perfect bra. I've been struggling for years and only get to wear sport bras, which is not exactly exciting. My boobs are not THAT big, I still can find my size in most shops, but having a D+ cup and being on a budget can be pretty much tricky (at least where I live). Most of my friends don't encounter the same 'issues' I do, so it feels great to read such a positive story, and it motivates me to search further for the perfect fitting bra! Yay!
A big THANK YOU then, and, well, my apologies for mistakes in my comment!

True & Co is a pretty great site for bras, they ask some fit questions and then have the no charge try on at home deal. I've been happy with them. And as a 34 DDD or F it's not always easy to find a good fit. Thanks for bringing this up! http://my.trueandco.com/x/x5NyGc

So: you definitely blew my mind with this, especially the bit about armpit fat. I delved into the various online communities that talk about these things, found some pointers, remeasured myself, and ordered some new bras off Zappos -- and I'm wearing the first bra that's ever actually fits me. I'm not an uncomfortable, squirmy 34B -- I'm a 32DD, if not 32E. It's so nuts, and it's so fantastic!

So, thanks for writing this, and for sharing so freely! Internet high five!