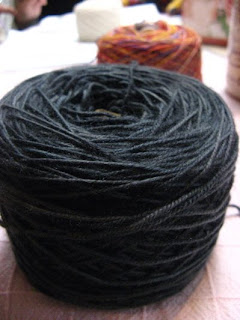 Grey grey grey. I know that there's two different ways to spell it. I think that both are technically correct. But which is more aesthetically pleasing: grey, or gray? Grey with an "e" because it looks sleeker, more refined? Or gray with an "a" because it looks humble, just the kind of gray you could get a cup of coffee with? The conundrums of the English language, I tell you. Speaking of language conundrums: lately I've been thinking more in Japanese, which is weird. I'll be about to say something, and then realize that it's in another language that the people I'm talking to don't actually understand. Sort of mind-boggling. 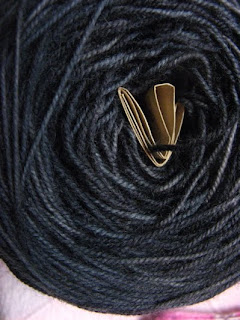 Onto yarn! This yarn is called Yummy, by Fibranatura. I'm not totally sold on the dyejob of the more variegated colors of this yarn, but I'm totally ok with shades of grey. This yarn hasn't told me what it wants to be yet, but I have a feeling that it will make for some hard-wearing socks. It has a relatively tight twist, which makes me like it despite its somewhat rough hand - then again, I always find that rougher sock yarns soften up pretty quickly after washing and wearing.

Another weird note: a few weeks ago in Art Conservation, we talked a little bit about egg tempera and its various qualities. Apparently it has very saturated color due to the cross-linking of the proteins in the egg as it dries, whereupon it creates a pretty strong polymer.

I observed this phenomenon today in my apartment, in an omelette pan. My dish-washing experience was heightened by the knowledge that this same property has kept thousand-year-old paintings in their same basic form for all of that time. And now my kitchen's clean, so that's a plus too.
Posted by Cory Ellen at 12:07 AM

Funny bit: when I read "Stash Appreciation Wednesday" I always just think "Stash Wednesday" and am amused because it's a play on Ash Wednesday and I grew up Catholic...

And I usually go for grey as well, over gray.