Dressing the loom does not involve pants 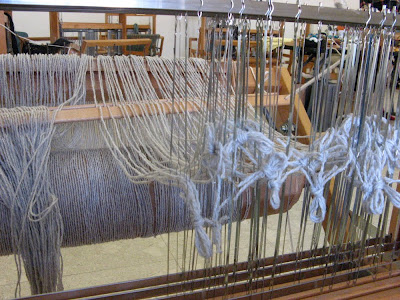 This week I pretty much spent dressing my loom. I started off by measuring out my warp on a warping board, which is a big rectangular frame with pegs on the sides that are spaced to be just about a yard across - very handy! That took Monday and Tuesday, after which the instructor helped me get the bulk of the warp onto the warp beam, which is the big roll of yarn behind my heddles above. Because of the way we wound the warp on the warping board, there was a handy little cross that helped the threading process immensely. Wednesday and Thursday I worked on threading my heddles. 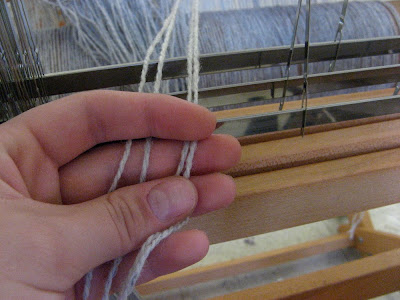 The threader that I used looks kinda like a modified crochet hook. And, as with a crochet hook, I am not terribly fast or skilled at using it. I also decided to take my ring off, since I was reaching around in the guts of the loom with my feet on all of the pedals to keep the heddle frames up at a reasonable level for working. 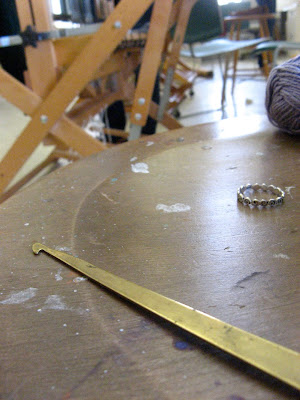 By the end of Thursday, I had all of my heddle threaded. Now I'm just hoping that I got all of my pattern right... I made a really dumb mistake early on, by calculating 14 full repeats that came out to a lovely 312 warp threads. Then I read "300" as the final number and didn't get enough warp threads for my beautiful full repeat. However, at the point at which I realized this, like hell I was going to go back... so 13.5 repeats will have to do. Grr. 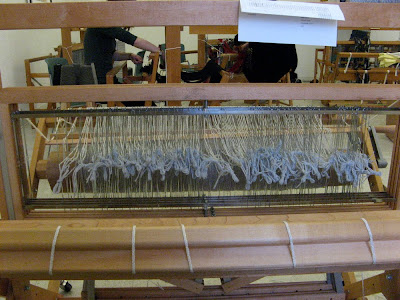 And, finally, Friday I threaded the warp through the reed and tied it off. Now I'm just waiting for more yarn so that I can start making fabric. 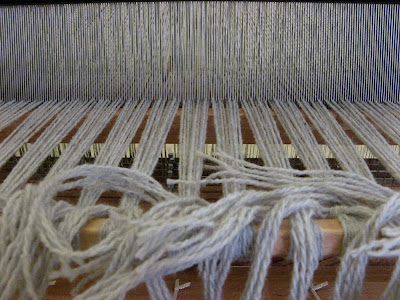 And in the meantime, of course, I'm making fabric in other ways. 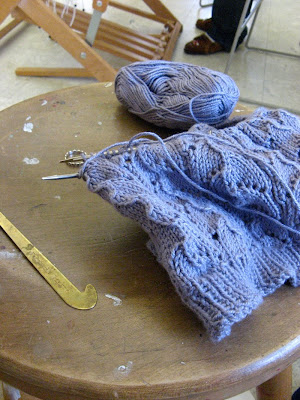 I read your post before going to bed and then had a dream about your weaving. Only it was bright orange and dark blue and for whatever reason I was starting to weave it or show you something (how to work with two shuttles?) and the loom kept being the wrong height. But then we got it to work and you wove 2 repeats of the pattern! Hooray! The end.