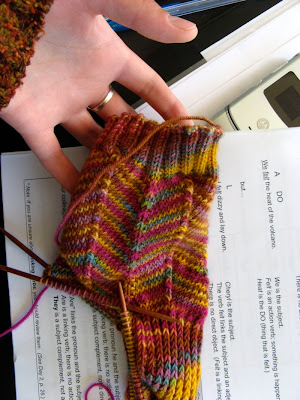 Failed G-Rocks Jaywalkers of 2007
Here's a story: many years ago, I bought my first skein of Socks that Rock (STR). For those in the fiber world, you know that Lime and Violet have spent tens, if not hundreds, of hours squeeing over it; it sells out super fast at fiber festivals; and, lastly, there seems to be a sort of polarized mass of opinions on it. On one hand, you have those who are obsessed with the colors, no matter the pooling situation, and would sell their left kidney to get into the monthly sock club. On the other, you have people, who, like me until two hours ago, were sort of "meh" about the whole thing.

There's only one really ridiculous problem with the above statement. Okay, ready? I own six skeins of the stuff. Granted, two are in a semi-solid colorway, Oregon Red Clover Honey, which is a prime example of Color Greatness. But the other four are variegated, all bought from Tricoter in Seattle on one of my trips back home.

Now, the first skein is easily explained away. I had heard a lot about Blue Moon, and had read many a blog post that extolled the tight twist and incredible colors of STR. So I went with my mom and we bought some. I picked up a skein of G-Rocks, and knit it into a Jaywalker sock that pooled in an ugly, lopsided way and was entirely too small. Then I changed needles and knit it again, and the colors were beautiful and stripy, and it was too big. Then I changed needles again and the colors were happy.... and the damn thing was too small again. I began to see a pattern, and shoved the yarn into my closet so I could cool down.

But for some insane reason, I didn't stop acquiring it. I got another skein, this time in the colorway Rocktober, thinking that it would be nice for some Embossed Leaves socks. I knit an entire sock before realizing that it was way too big, again. Then my mom gave me the skein of Puck's Mischief that she had bought at the same time as me, after discovering that socks aren't her thing. Then, last summer, I bought a skein of Carbon Dating, pretty much because I am a total dork and could make chemistry jokes more effectively if I had carbon-tastic socks on my feet.

All of this would be a lot easier if I weren't such an insane perfectionist about my knitting. But I am really deeply bothered by pooling, and this yarn so loves to do it - especially in fancy, lacy, cabley patterns. Which kind of brings me to tonight's simultaneous facepalm and cry of victory:

Dear readers - all five of you, hi Mom and Mr. Charlie Weasley! - it has taken me nigh three years to pick a plain sock pattern, cast on, and see what happened. And it turns out that it didn't take any beating into submission, or cursing, or really anything other than watching Gilmore Girls and lazily knitting a Madder Ribbed Sock from Nancy Bush's Knitting Vintage Socks, also known as my favorite sock book ever. No, there was no fight; the yarn kind of cooed and rolled over so I could rub its belly. 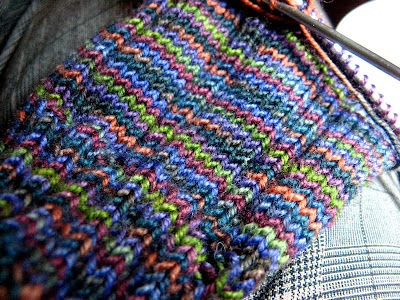