A little more than a week ago, I survived my own wedding (although it was a pretty fun adventure - there will be stories to come!) and emerged from it a newly married person.  So far, married life has been... well uh, pretty much like pre-married life.  But also not?

I think the best way that I can describe it is this: even though Lumberjack and I are still essentially the same people in the same relationship, the depth and breadth of our plans has grown exponentially.  Where before, our planning conversations mostly involved the next two weeks to a year, and often revolved around mundanities such as buying toilet paper and dish soap, our conversations now start with "when we..." and end many years in the future.  "Toilet paper" and "dish soap" have been replaced with "traveling the world" and "babies" and thus, the gravity with which we treat these conversations is... somewhat greater.*  Except that I still sometimes make pterodactyl noises during serious discussions.  (I currently have laryngitis, which means that I am capable of producing the best dinosaur noises, probably ever.)

But anyhoozle.  All anyone really needs to know is:

5.  I have ten skeins of delicious DK and worsted weight yarns to make the very appropriately named Amazing Seed Stitch Wrap by the Purl Bee.  Have you seen it?  Because it is spectacular. 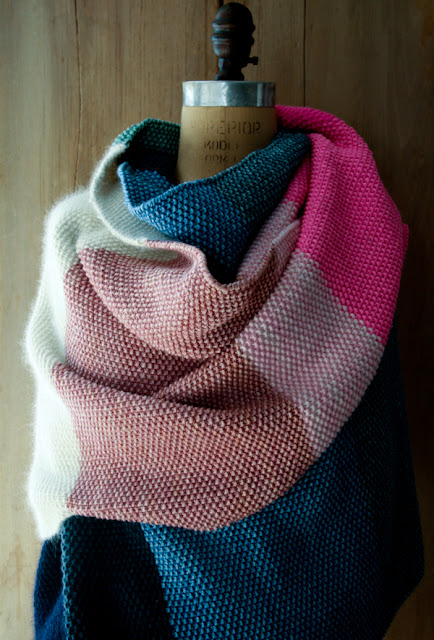 6.  I now have the brain cells to devote to knitting things other than plain socks.  Such as the Amazing Seed Stitch Wrap.

*And in case anyone is curious, the answers are soon and NOT SOON LALALALALALALA.
Posted by Cory Ellen Boberg at 1:53 PM

And that wrap is going to be gorgeous in those colors.

Thanks Andi! I'm super excited for this wrap - I've been dreaming about it for months.

Yay! So glad you had a wonderful day. That seed stitch warp is wonderful, it looks so snuggly for winter! :) x