After a Brief Hiatus... 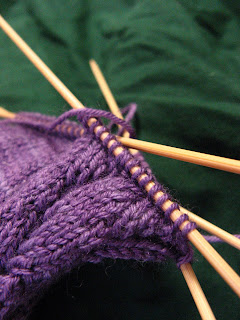 These socks are my Santa Cruz Waving Lace socks. For some reason, I had a serious jonesing for Lorna's Laces... so while on spring break in California, I picked up two skeins of Grapevine and cast on. I have one finished and half of the cuff of the second. They are my between calculus problems socks; my before lab socks; my "oh I'll just knit a row before dinner" socks. I'm in love, just a little - and they've gone so fast! No second sock syndrome in these parts.

I've been on a sock kick lately. Portable, interesting, and small quantities of (and thus inexpensive) yarn? Sign me up. 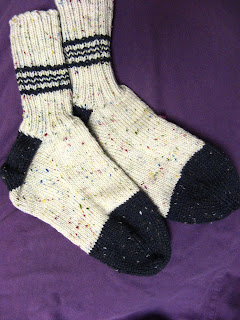 I'm also pretty seriously obsessed with Favorite Socks. The last three pairs that I have made have either been directly from or adapted from patterns in FS: I love the simplicity of the Waving Lace sock, and Lorna's slightly variegated solid is perfect for showing it off; the Embossed Leaves socks are delicately floral in a springy green Koigu; the Eesti Hiking Socks, though adapted, had a rustic and definite Manly appeal (must make boyfriend Manly socks to make up for giving him dainty ceramic kitty mug for birthday! Ennnnnggh!).

Most of all, I think I'm just addicted to the feeling of finishing projects. I've only recently become adept at this art; my perfectionism and laziness (who knew the two could coexist?) would cause numerous projects to languish on the needles. For some reason, though, I have begun to find simple pleasure in kitchenering a toe, and remaining monogamous to one project until it is finished. (Dammit.)

Luckily - or unluckily, depending on how you look at it - my yarn buying has slowed, but not stopped. I went on a little bit of a binge over spring break. My roomie and I ended up in California after taking the train down from Seattle. One day, I visited the boyfriend in Santa Cruz and he decided to take me to all the yarn stores he knew of. At one store, I bought two skeins of blue Malabrigo that is almost gemlike in color - deep blue, the color of the cups in my mother's best friend's kitchen when I was a child. I also bought the aforementioned two skeins of Lorna's Laces. A few days later, I bought a skein of laceweight Malabrigo in Capitola, along with some Addi Turbo circular needles to make the Swallowtail Shawl - my first shawl, planned or not. I'm hoping to cast on soon... but only after I burn out on socks! 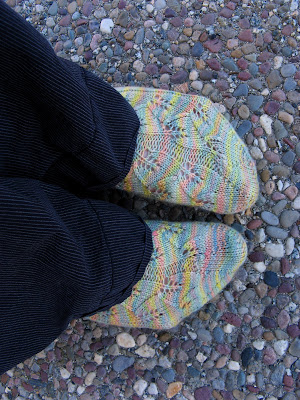 I must say, socks are fantastic, and I'm really loving that pair at the bottom.
I think I found your blog through ravelry ... it was probably the rat in your profile picture that did it for me. ^-^
Anyway, thought I'd drop you a comment to say hi and that I like your writing style.