Monday afternoon I had some homework to catch up on, so I went to a coffee shop to sit and sketch.  This design was loosely inspired by the Rococo period, when fashionable ladies wore giant hip pads called panniers underneath gowns.  I loosely based the skirt shape on the idea, instead using panels of a mediumweight silk or wool over a full underskirt.  I actually started with the jacket, styled after the riding jackets and caraco jackets of the late 18th century that usually had a fancy peplum or lacy "tail" in the back.  Then I added in some knitted lace stockings, since silk knitted stockings were a luxury of the time. 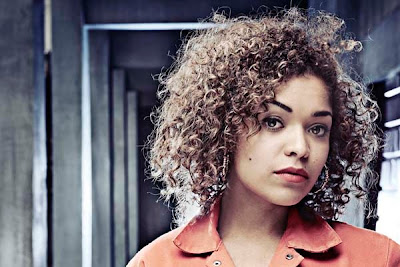 As I was drawing, I realized I had another pretty clear inspiration: Alisha from the UK television series Misfits.  (Basic premise: a bunch of kids performing community service for various crimes are hit by a freak storm and get super powers.)  She's a babe, and she knows it.  She has gorgeous curly hair and rocks big hoops, pinup makeup and a bad attitude even in her orange jumpsuit.  Lumberjack and I have been watching the show lately, and I love the cinematography and the character styling.

I also used some new pens for this drawing, Pigma Microns, and I'm in love.  I used the 03 size for the outlines and the 01 size for the face and details, and I really like how much control and depth the different sizes add.  I've really liked working in pencil, but I'm often disappointed when I get to the inking because my favorite small-gauge Copic lining marker died and I couldn't get things as detailed as I wanted.  Plus, you can use watercolors with Pigmas since their ink is not water soluble.

Now, to ink all 15 of my previous drawings for history... that'll be a project!

I can't believe there aren't 9000 comments on this post! I love your sketch, and appreciate your recommendation for the Pigma Micron pens. BTW, what pencils do you sketch in? Just a regular old #2 pencil, or mechanical?
Love your sketches

And of course I love, love, love your incredible knitting. I'm a lace school dropout...lol

Thank you! :) I sketch in size .07 mechanical Bic pencils. I don't like using regular pencils if I can help it - they don't stay pointy enough!