The Politics of Hemlines

Okay, so this is a difficult post to write.  And perhaps more than you wanted to know about me.  But I also feel compelled to talk about it, because it's been a long, long time coming. 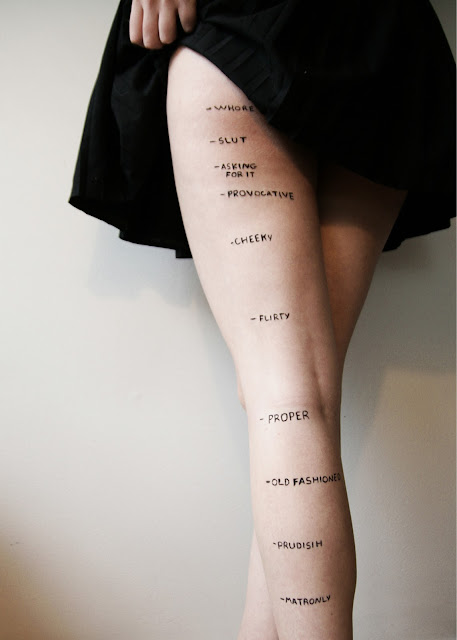 Part I: A Picture

Recently, this photo by a flickr user named roseaposey went viral on Tumblr and the internet in general.  Understandably, this has some connections to the fashion and sewing community, as hemlines are both a practical and a stylistic concern.  It's started a conversation on these words: what they mean, who gives them meaning, who gets to use them, and who is hurt when these words are used against her.

It also strikes a major chord for me, because I'm always and forever an Oberlin student.

But more importantly, because I'm a survivor of sexual violence.

I recognize the condescension and mock-concern in these words; the gross subtext that the length of your skirt says more about your sexuality than your words and actions do.

I recognize the slut-shaming words, because my best friend at the time used them to describe my experience to me, and thought that it was okay to do so.  I doubted my own feelings for years because of words like these.

I recognize the desire to believe that longer hemlines will protect you.  I changed to a simple wardrobe of slacks and different colored t-shirts for years after it happened, thinking that I could make myself invisible by changing what I wore.

I also recognize, almost seven years later, that a layer of fabric cannot protect you from someone who wants to hurt you.  That was a long and difficult lesson to learn, and ultimately not a very uplifting one.

In general, the older I get, the less okay the whole thing seems.

All of this is bullshit, and I think the artist is doing a beautiful job of calling it out as such.

Women have different reasons for wearing what they do. Maybe she has a hormonal imbalance that makes her overheat in everything she wears, so she wears camisoles under her blazers.  Maybe she's a teenager and loves cut-off shorts because her unbearably cool older sister wears them.  Maybe she loves wearing historical clothes because she finds the story behind them fascinating.  Maybe her partner just died and she's wearing the dress she wore to their first anniversary.  Or, maybe she just feels comfortable and beautiful.

Any one of these reasons is reason enough.  No matter what a woman is wearing, she deserves not to be judged and shamed for it. 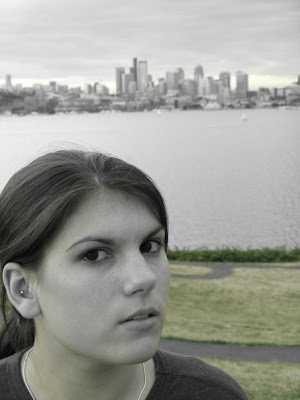 I have very mixed feelings about writing about this.  But it's also hard not to talk about it, because the experience shaped my life profoundly.

My life pretty much fell apart when I was raped, and it was further complicated when the man who hurt me was murdered during a dispute between him and my former landlord.  I was 18 and naive, and that made me feel responsible - for both my own trauma and his death - for a long time.  He wasn't a great person, but he also deserved to live.  I struggled between compassion for him and hatred for a person who no longer existed.  Sometimes I still do.

But I can't.  And that will always be hard.

Since then, I've pulled my life back together.  I distanced myself from former friends who mocked my story rather than believing it.  I went to college and graduated.  I started making friends again.   I like to think that I've made a better life for myself than the one that fell apart.

But sometimes the weight of this story is too much.  It feels like I'm keeping a secret because I don't want to be shamed, when the real problem is that my survival is seen as shameful rather than strong.

In the end, I think that this is what the photographer was trying to critique: that in this society, silencing women with sexualized shame and judgment is as easy as using the right word to describe her hemline.  And this has to change.
Posted by Cory Ellen Boberg at 4:09 PM

Thank you for writing this.

Thanks for this post. It is hard even when we know in our heads that it's not what we wear to believe it in real life. Thank you for sharing your story.

<3 Can't say anything that would accurately capture all my feelings, so I will just say thank you. You are wonderful.

Phenomenal post- thanks so much for putting it our there.

Powerful and strong. You and your words.

Thank you. I saw this picture, and it really bothered me, but I couldn't properly articulate why or how. You've done so better than I ever could.
P.S. Here's a hug to your 18-year-old self, too.

Thanks for picking up when I called! :)

Thank you for sharing

Nicole of all trades said...

I just want to give you a hug after reading this. You ARE strong. Stronger than you may know, and stronger than anyone else may ever think.