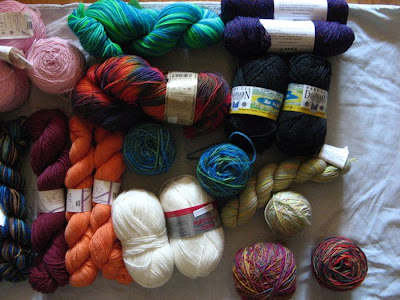 These are pictures of my sock yarn stash taken about two years ago, right before I went to college.
Out of all of the yarn pictured, only 6 sock amounts are left. Considering that this was 16 pairs worth of yarn, that's pretty incredible. Some of the yarn is sentimental, but some of it just hasn't told me what it wants to be yet. And then there's the stuff that has told me what it wants to be, but I haven't gotten around to knitting it yet. 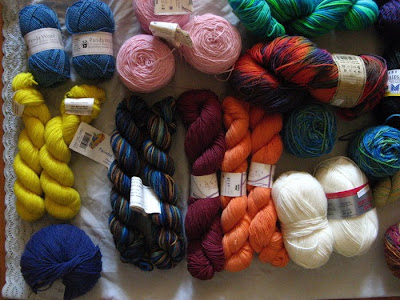 One of the things that's come along with my change of major is a radical shift in goals. I've always known that I want to live in Japan, or take a fellowship in Indonesia or India if the opportunity presents itself, but now I also know that I want to pursue a career in textiles. I think that there's a way to combine the two, but it will take a little finagling and a lot of patience.

Part of getting to where I want to be involves getting organized. I'm a pretty cluttered person in general, but it drives me crazy when I can't find my yarn or needles because I don't have a real place to put them. A few weeks ago, I caved in and went to Wal-Mart to buy a set of shelves for my sock yarn, and I gotta say it's really nice to be able to walk in and see all of it sitting there, just waiting to be turned into something beautiful.

I think another really helpful part of getting organize will be to document my entire stash. I've started with the Stash Appreciation Wednesdays, and it's been surprisingly helpful - my Ravelry stash has gotten significantly bigger and prettier in the last week or so. It's nice to have it all written down so that even when I move and my boxes get pushed around and I can't even find the cord to my rice cooker (still haven't found that one) I still know that I have 6 skeins of Malabrigo worsted, not 5.

1) Get my butt in gear for my private reading. I'm planning to knit an Egyptian stranded belt/scarf (sounds weird, but it's awesome so far), a Cowichan-inspired sweater, and a Norwegian stranded pair of socks or hat, depending on my time frame. It's been a struggle finding books, but I've landed on a pretty intriguing topic: historical stranded knitting traditions. Although I realize that I can't create a genuine Cowichan - because it is a knitting tradition embedded not only in materials and construction, but in culture and place - I would like to try to knit a garment that is inspired by it.

2) Organize, document, and start to knit down some of the stash. Right now it feels a little bogged down, and although I'll have to get a bit more yarn for the private reading, I'd like to reduce my sock yarn stash. I don't tend to buy sweater amounts because they are so expensive, but I think that at this point I actually need more sweaters than I have the yarn for. I just need to learn that getting a sweater's amount is ok rather than just buying sock yarn.

3) Start applying for programs abroad - there's an intriguing intensive language scholarship in Japan sponsored by the State Department next summer. Next year I also want to apply for the Watson and Shansi fellowships, as well as the JET program. And, eventually, FIT in New York City for textile conservation.

4) Start playing with yarn and making up garments. Even when it's hard, even if it's just for fun.

5) Learn to weave, spin, and sew. These are biggies - if I really want to be a textile conservator, I want (and probably need, let's be serious) to understand the construction of all types of fabrics, not just knitted ones.

That's a lot of list, there. Here's some pretties for reading until this point: 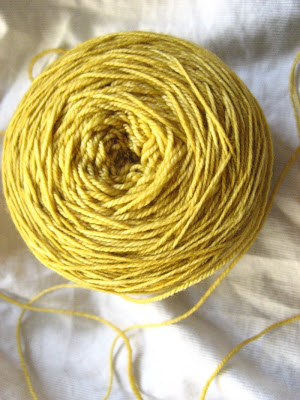