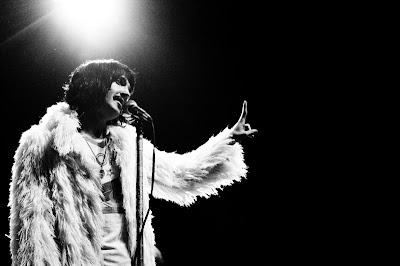 Lumberjack, my brother, my friend Derek, and I went to see a show by The Darkness this last Saturday.  A glam-rock band from Cincinnati called Foxy Shazam opened - and absolutely stole the show.  The lead singer was all over the place: dancing frenetically, throwing his mike around the stage, collapsing to the ground and getting up again the space of three or four seconds - not to mention that his voice sounds like a close cousin of Freddy Mercury's.  The other band members got in on the fun, too: at one point, the keyboardist went crowdsurfing - with his keyboard.  And at the end of their set, the lead singer smoked three lit cigarettes, took a ride around the stage on his bassist's shoulders, and then ate the cigarettes whole.

Their showmanship and musicality seemed to epitomize the greatest of glam-rock, with tight pants, dramatic hair, sequined vests, and thrilling, spectacular, unstoppable energy.  From the second they walked on stage, you couldn't look away from them.  I loved the in-your-face style and badassery of the whole show, and I absolutely adore the fact that these guys stomp around the stage bursting with a potent male sexuality while wearing sequins, scarves, and eyeliner.  Screwing around with gender norms seems to be one of the major hallmarks of glam-rock and hair metal, and I like it. 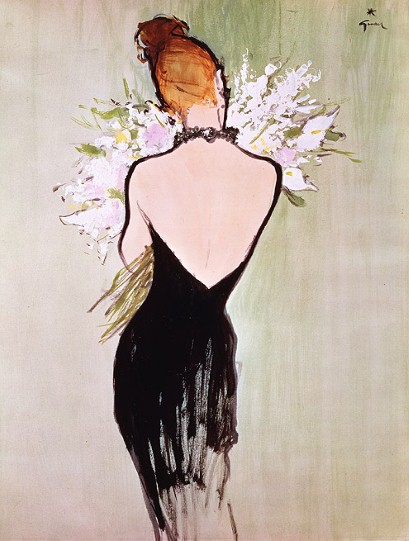 On a totally different note, I've also been pretty immersed in fashion history books.  I have a big stack of huge books on Art Deco fashion, '40s and '50s couture, Yves Saint Laurent, and different types of lace from history.

It's been fascinating to look at early 20th century fashion, because fashion illustrations played an integral role in both portraying fashion and creating the sense of glamour associated with couture and early ready-to-wear designs.  It's also interesting to see how the popular body type and facial shape change over the years: in the 1910s-1920s, it was all about long lines, thin eyebrows, and round faces, where towards the 1940s the trim, but slightly shapely figure was popular - with very little yardage used due to rationing - and then finally in 1947 Dior introduced the New Look, with the tiny waist and the full skirt as a sign of the decadent post-war period.

Even though I'm not the biggest fan of world politics in the late '40s and early '50s, they are definitely my favorite decades for fashion.  So many shapes and silhouettes of that time period are still such classics that I'd say it's as close to timeless as fashion will ever get: the little black dress, the fit-and-flare dress, little tailored suits, and perfectly fitted trenchcoats.  Sigh. 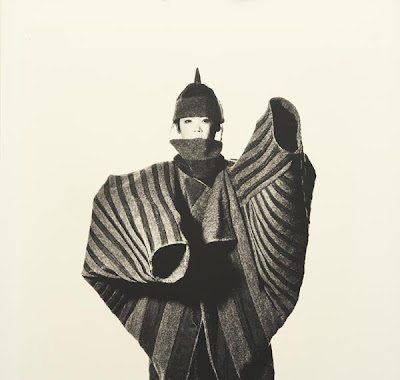 Coat inspired by an onion flower head, by Issey Miyake.

As you may be able to tell, I'm a little all over the place.

One of the other books I got at the library was a retrospective of Issey Miyake's work, particularly from the '80s.  The clothes are as much pieces of art as fabric: he plays with pleats, volume, material, and shape in such an innovative way that has clearly influenced the current generation of designers.

This coat and hood set in particular was my favorite from the book; it's a knit coat made from wool and nylon mesh, and I love the interplay of textures and the strange yet organic shape.  It makes me think of Setsuko Torii's knitwear designs, with her use of metal-blended yarns that give fabrics a new dimension.  I like that it's a different way of thinking of fashion: clothing not simply as body coverings, but not so isolated from the body as two-dimensional art, either.  At times it seems like these pieces don't belong on the body, yet without a body in them they would lose their internal structure.

I also love that there's a different context for his designs than the typical Western fashion fare: in the book, you can see echoes of the breastplates of samurai armor, kimono and hakama (Japanese-style trousers), shibori and indigo-dyed textiles.

Overall, there aren't necessarily any connecting threads in these three modes of style, but I find them all equally compelling.  With so much information coming in all the time from school, books, and events, it's a little overwhelming, but it's nice to single out a few and find some focus.  Maybe someday my spongey brain will figure out what these things have in common and give it a name.
Posted by Cory Ellen Boberg at 8:00 AM

Frankenstyle? Do I hear a variation on themes that started with Hanna Anderson, rain boots and a screaming pink skirt?