On Inspiration and Changing Perceptions The past couple of months have been a learning experience for me in a few major and unexpected ways.  In addition than the basic skills I'm picking up from my classes, I'm also starting to think about inspiration and creativity in a really different way.  Where before, I always thought that a creative person should be able to come up with  ideas in a vacuum, fashion school is constantly reminding me that everything is connected, and thus, inspiration is everywhere.

Part One: In Which Our Hero Is Humbled

I had a moment back when I was a pretty new knitter where I thought I was the coolest shit.  See a pretty hat in a magazine?  I could totally figure out that stitch pattern if I wanted to!  See a sweater that I like in a store?  It's a knee length, black cobweb-weight lace knit, whatever - I could totally make that!  I was so hopped up on this idea that I could do anything that I want that I forgot two important things:

1.  Valuing other people's creative work is important, because if you don't, they may not keep making it.  This is one of the biggest reasons that I buy patterns by independent knitwear designers, and sometimes pay a little more for handmade: because when it comes to designers, my voice is in my dollars.  This is twofold for me, because someday I want to be one of those designers.  So I try to give the support that I would want to receive.

2.  Sometimes, and by sometimes I mean most of the time, reinventing the wheel is boring, and the thought of actually knitting 6 billion yards of black lace fabric makes me want to curl up into a ball and cry myself to sleep in a locked room.  If I want that sweater right now, I should probably just buy it instead of kidding myself into thinking I'll actually make it, or worse yet, instead of being so delusional that I actually go out, buy the yarn, start the project, and then set it on ritual fire six years later when I realize that it's a total and disastrous waste of time.

I finally got out of that rut a while back, but I was definitely reminded of it when I bought the magazines above.  A few years ago, my cocky little self would have been all but I can just make my own patterns why should I buy magazines and books la la la, but my super-awesome-creative-work-valuing self of today is all over that shit.  When I see something that I like, I give myself the permission to like it instead of beating myself up that I didn't think of it first.  It's been very freeing.

Part Two: In Which Our Hero Appreciates Her Own Nice Points, Too

This last week I had my second day of History of Costume.  One of our assignments was to come up  with two outfits based on the period of history we had talked about the class before.  At the beginning of class, we each showed our sketches and talked about our inspirations.  The picture above is a rough sketch I did inspired by Egyptian gala dresses, which were white, sheer dresses with a red sash tied in a particular way at the waist, like so: 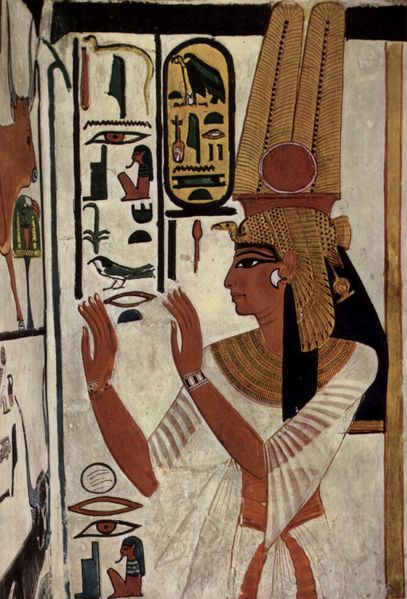 It was interesting to see what everyone had come up with given the same basic task, and it made me appreciate how different our brains are.  I enjoyed drawing this assignment, and I actually liked the outcome, too.  It was a nice reminder that inspiration really is just another a raw material for the creative process.  It may or may not be apparent what the inspiration was when you step back and look at the finished product, but no matter what, if it was a springboard that got your mind to the right place to create something you like, it did its job.

It was also a nice reminder that I can, on occasion, create things that I'm happy with.  Which is really nice to remember when you've just royally fucked up sewing a flat fell seam for the zillionth time.

Part Three: In Which Our Hero Gives Herself Permission To Be A Sponge (And Like It) One of my main reasons for thinking so much about creativity and originality is this awesome web series: Everything Is A Remix.

The basic premise is that literally everything that has been created, from fashion to food to movies, is based upon or inspired by something else.  And there's a bunch of cool and/or downright fascinating illustrations of that point.

Speaking of freeing: since everything you could possibly do or make has already been done by someone else before in both better and abysmally worse ways, there are no limits in what you can try.  It also removes this idea that somehow, you have to be "original".  And although I think that sometimes constraints can be good, especially for making you focus on a topic or project, this particular one is dumb and counterproductive.  While wholesale copying of someone's personal design or thought is never good, being afraid to create things for fear that they may not be original enough kills creativity before it even sprouts.

So part of my goal this year, in both fashion school and knitting, is to be a total sponge.  Rip up magazines.  Read lots of blogs.  Listen to lots of music and sing along.  Give myself permission to be unoriginal, to copy and learn from people who are great at what they do (while giving full credit where it's due, of course).  Appreciate creative people and their work, and let them be an inspiration for me.

And lastly, the yarn I just bought above is from Pigeonroof Studios, a silk/cashmere/merino laceweight blend, and I love it passionately.  It's a pale blue-green, and it's completely outside of my color comfort zone.  But I love it, for some strange and compelling reason.  And I'm going to trust that gut feeling and make it into something beautiful and lacy and completely unoriginal.